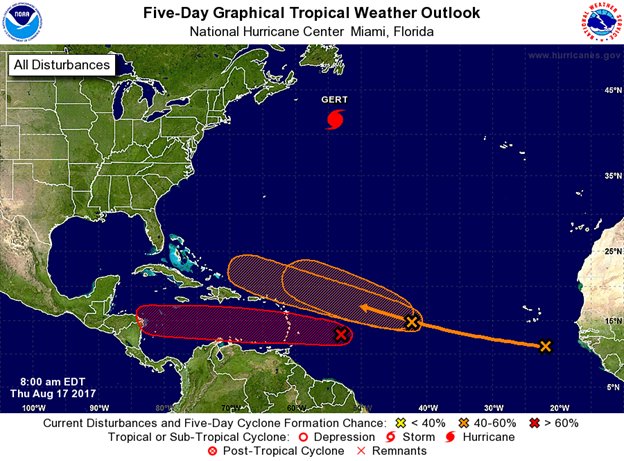 The Met Office says disturbance 91 is now expected to impact the Caribbean as, at least, a Tropical Depression or worse.

According to the National Hurricane Centre shower activity associated with a second area of low pressure located about midway between the coast of Africa and the Lesser Antilles has also become a little better organized during the past 24 hours.

Continued gradual development of this system is possible during the next couple of days while it moves west-northwestward at 15 to 20 mph, but upper-level winds are expected to become less

conducive for tropical cyclone formation when the disturbance moves

north of the Leeward Islands this weekend.

A tropical wave located over the far eastern Atlantic Ocean near the Cabo Verde Islands is producing disorganized showers and thunderstorms.  Gradual development of this system is possible during the next several days while it moves westward to west-northwestward at about 15 mph.