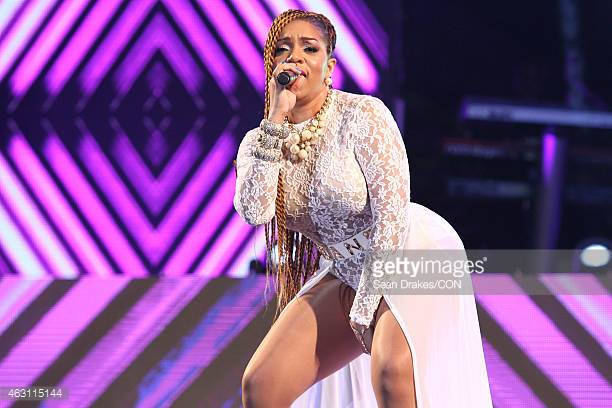 Still in therapy for an injury endured after falling through a stage in Bermuda last August, Trinidadian soca artiste Destra Garcia took to the stages for Bacchanal Live on Friday night. The Soca or Die singer, determined to please fans, did surgery to carry on with the tour and sports two screws in her foot.

The mood inside Mas Camp was relaxed until her arrival as most ‘bacchanalists’ were simply awaiting the soca artiste’s performance. While not filled to capacity, the venue looked healthily populated by the time Destra Garcia touched the stage just after midnight.

Dressed in a nude look spandex body suit with glittery accessories to show a fit physique, Destra Garcia started the night’s live show singing her first release for Carnival 2018, Family. Her rendition of the song showed the emotions about her painful experience. Added to that, she expressed gratitude to her Jamaican fan base for reaching out on social media throughout the ordeal.

Destra is not called Queen of Bacchanal for nothing, showing no fear as she moved to the edge of the stages to be closer to the audience. Her dynamic and energetic style, which includes daring members of the audience to get on bad, was not excluded. Two patrons eagerly joined the soca artiste to spice up the entertainment when she invited them on stage.

Revellers laughed as the male patron was caught by surprise with what came next. Destra gave the bespectacled Adonis a little rhythmic waistline movement then handed him over to the female, Janel Wilson, a local dancer who took over with a somersault and wine, which ended up with them on the stage floor.

Those who turned up at the Mas Camp were treated to a diverse set of the soca artiste’s new and old music, singing Somebody, Dip and Ride and Technically verbatim with the Queen of Bacchanal. And although Destra says songs like It’s Carnival and I Dare You have been removed from her set, she could not leave the stage without giving a taste of the tracks.

After Destra’s exit it appeared the patrons’ energy was left at a high. The previously composed stances were out the gates and gyrating routines could be observed all around the Mas Camp