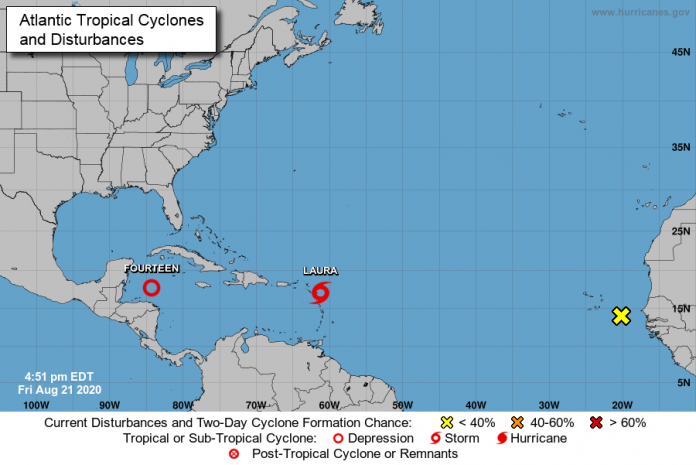 “I understand that there is a certain amount of panicking going on. There is no need to panic; this is only a*tropical storm* – only minor preparations are required, as only limited impacts are possible from minimal storm-force winds,” he said.

Destin said in a tweet that “at worst-case, we could get winds of 45 to 55 mph, just a bit more than what we got from Potential Tropical Cyclone Nine. The storm will be in Puerto Rico by tomorrow morning – allowing for the quick return to normalcy, by early tomorrow.”

The National Hurricane Center says Tropical Storm #Laura is near the Leeward Islands.

Laura is moving toward the west near 17 mph (28 km/h), and a generally west-northwestward motion at a faster forward speed is expected over the next couple of days.

On the forecast track, the center of Laura will move near or over portions of the Leeward Islands later today, near or over Puerto Rico Saturday morning, and near the northern

Maximum sustained winds are near 45 mph (75 km/h) with higher gusts. Some slow strengthening is forecast during the next 48 hours.

Tropical-storm-force winds extend outward up to 115 miles (185 km) from the center.