Antigua and Barbuda’s Dental Assistant fraternity was given a major boost on Wednesday (June 7th) when nine shining stars completed a three-month course which was held under the umbrella of the Ministry of Health and the Environment, the Labour Department’s Job Experience Program and the Ministry of Social Transformation and Human Resource Development.

Just after 7.00pm Wednesday evening, seven ladies and two gentlemen took their walks down the aisle as they were showered with accolades during a graduation ceremony at the Training Division on Church Street.

The successful candidates collected their certificates and other incentives much to the delight of the appreciative crowd at the well-attended function.

During her feature address, Chief Medical Officer, Dr. Rhonda Sealey Thomas, welcomed the graduates to the Healthcare Team and reminded them that they are now part of an important network in which everyone works together for the betterment of the nation.

“I want to stress healthcare team because in the Ministry of Health and the Public health sector, we look at healthcare and the services we provide as a team approach. It’s no one individual who provides health services, dental services to the public. It’s a team approach. The dentists, the hygienists, the nurses, the dental assistants, the ward assistants, it’s all a team approach where we work together professionally in the best interest of the patients,” Dr. Sealey Thomas declared.

Dr. Williams also addressed the graduates and during his brief discourse he implored them to pursue additional knowledge in the dental field because they are now only at the tip of the iceberg.

He was later presented with a plaque for his tireless support and unwavering commitment to the advancement of his students. 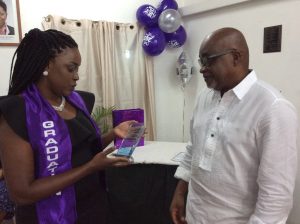 Apart from their Certificates of Attainment for the dental course, the nine participants also collected awards for the successful completion of the Basic Life Support-Program (BLS) which was under the supervision of the Emergency Medical Services.

Those awards were handed over by Russell Daley, who along with Morvin Fiedtkou were themselves showered with appreciation.

One of the highlights of the night was a special award presentation which saw a pink bag of presents going to Mrs. Miguelle Christopher, the Chief Training Officer at the Training Department.

Christopher later said that the training was a multifaceted program which covered a wide range of subjects.

“I think it was an excellent program, they are definitely well trained. The trainee dental assistants were required to do four days of practical training where they were actually attached to the various clinics across the country where they would learn by doing and then they would have one session per week where they would complete the theoretical aspect of the training. In addition to that, they also had sessions in client care, so it’s not just knowing about the technical side of dental assistance but it is also about learning how to take care of patients and how to treat them with respect,” Christopher disclosed.

Seven of the graduates will be employed in the government and private sectors while the other two will be furthering their studies abroad. 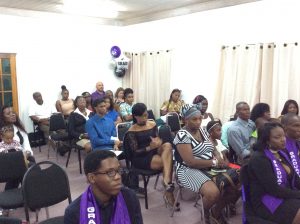