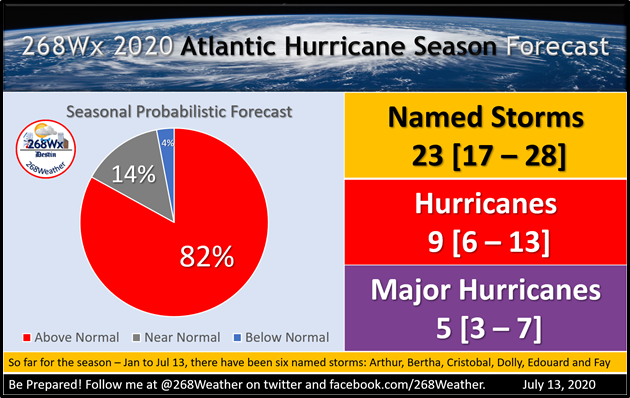 My “July stand by” updated forecast for the 2020 Atlantic Hurricane Season is out, and it continues to call for an above normal season, which is likely to be hyperactive – well above normal.

To date, the season has produced an ACE of 7.8, twice the usual amount for January through July 13. A normal season produces 106 ACE. Also, there have been six named storms to date, five time the average of 1.2. So, it has been a record busy season. Never before in history have we seen this many Atlantic tropical storms this early in the year.

The main reasons for the above normal forecast are:

The greater the likelihood of these two things happening at the same time – August to October, the greater the chances for an above normal season.

There is one thing that may mitigate these developing near perfect conditions for tropical cyclone formation – more than usual Saharan Dust, streaming across the area. If this were to continue, the forecast numbers would be lower. Unfortunately, we have no skill in forecasting the dust beyond a week; hence, we do not know if the dust will continue beyond July and into the peak of the season – August to October.

Clearly, we have no control over the numbers for the season. But notwithstanding the forecast, you should always prepare the same each season, as it only takes one hurricane to ruin your year and or life.