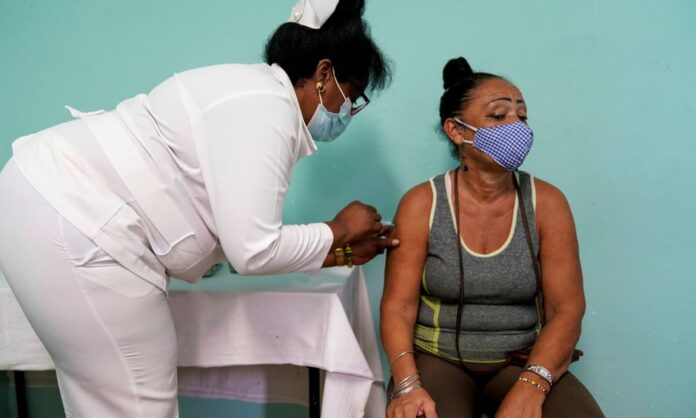 THE GUARDIAN: General Máximo Gómez, a key figure in Cuba’s 19th-century wars of independence against Spain once said: “Cubans either don’t meet the mark – or go way past it.”

A century and a half later, the aphorism rings true. This downtrodden island struggles to keep the lights on, but has now vaccinated more of its citizens against Covid-19 than any of the world’s major nations.

More than 90% of the population has been vaccinated with at least one dose of Cuba’s homegrown vaccines, while 83% have been fully inoculated. Of countries with populations of over a million, only the United Arab Emirates has a stronger vaccination record.

“Cuba is a victim of magical realism,” said John Kirk, professor emeritus of Latin American studies at Dalhousie University, Canada. “The idea that Cuba, with only 11 million people, and limited income, could be a biotech power, might be incomprehensible for someone working at Pfizer, but for Cuba it is possible.”

Like most Latin American countries, Cuba knew it would struggle to buy vaccines on the international market. So in March 2020, with foreign exchange reserves plummeting due to the loss of tourism revenue and ferocious new US sanctions, the island’s scientists got to work.

The gamble paid off: this spring Cuba became the smallest country in the world to successfully develop and produce its own Covid vaccines. Since then its well-staffed, if dilapidating universal health service, has rolled out injections at a fast clip, inoculating even young children (all vaccination on the island is voluntary).

Both vaccines are over 90% effective, according to Cuban-run clinical trials conducted last spring. Successful rollout has brought infection rates down from among the highest in the western hemisphere last summer to low levels today.

Last August the island reported hundreds of Covid deaths per week; last week there were three.

The vaccine success is all the more striking when set against the parlous state of the healthcare service in other areas. With hard currency inflows cut in half over the last two years, antibiotics are now so scarce that 20 pills of amoxicillin trade on the black market for the equivalent of a month’s minimum state salary. Out of plaster cast, doctors in some provinces now resort to wrapping broken bones in used cardboard.

“Ever since the 1959 revolution, Cubans have embarked on these grand crusades which are quixotic yet often successful,” said Gregory Biniowsky, a Havana-based lawyer.

A prime example, Biniowsky said, was Fidel Castro’s pipe dream of investing one billion dollars in biotech after the Soviet Union disintegrated. “Any rational adviser would have said this was not the time to invest resources in something that might bear fruit in 25 years. And yet here we are now … where these fruits of the biotech investment are saving lives.”

Other quests have dramatically failed: the Ten Million Ton Sugar Harvest of 1970 aimed to produce an unprecedented amount of sugar to spur growth. But to cut the cane, workers were pulled from their regular jobs, paralysing industry and wreaking havoc on the economy.

“As a nation there’s a tendency to get really good with the big things, and awful at the everyday things,” said Hal Klepak, professor emeritus of history and strategy at the Royal Military College of Canada.

“The whole idea of electrifying the country [in under a decade], abolishing illiteracy in 2.5 years, and medical internationalism – these were all just mad schemes. And they did it.”

Today, Cuba posts tens of thousands of doctors and nurses doing humanitarian work abroad – but fails to grow enough potatoes for the population.

Cuba’s highly centralized, state planning system – one of the last in the world – goes some way to explaining this paradox. When there is political will from the top, objectives can be driven forward; when there’s a lack of direction, the island’s rigid, Kafkaesque bureaucracy can elevate passing the buck to an art form.

“In capitalism you tend to have, even with very little things, somebody to fill the market,” said Klepak. “The difference with Cuba is that for [most economic] decision-making, there isn’t anyone but the state.”

After registering less than 100 cases a day for weeks, infection rates are now rising due to the highly contagious Omicron variant. Cuban scientists have not released data on the efficacy of their vaccines against Omicron but have begun work to update their vaccine against the variant.

In the meantime, the Cuban ministry of public health has fast-tracked its booster campaign, and aims to give almost the entire population an extra shot of vaccine this month.