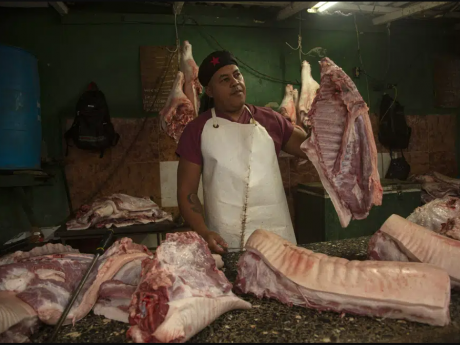 As Belkis Fajardo, 69, walks through the dense streets of downtown Havana with a small bag of lettuce and onions in hand, she wonders how she’ll feed her family over the holidays.

Scarcity and economic turmoil are nothing new to Cuba, but Fajardo is among many Cubans to note that this year is different thanks to soaring inflation and deepening shortages.

“We’ll see what we can scrap together to cook for the end of the year,” Fajardo said. “Everything is really expensive … so you buy things little-by-little as you can. And if you can’t, you don’t eat.”

Basic goods such as chicken, beef, eggs, milk, flour and toilet paper are difficult and often impossible to find in state stores.

When they do appear, they often come at hefty prices, either from informal shops, resellers or in expensive stores only accessible to those with foreign currency.

It’s far out of the range of the average Cuban state salary, approximately 5,000 pesos a month, or US$29 on the island’s more widely used informal exchange rate. Nearby, a pound of pork leg was selling for 450 pesos (around US$2.60.).

“Not everyone can buy things, not everyone has a family who sends remittances (money from abroad),” Fajardo said. “With the money my daughter earns and my pension, we’re trying to buy what we can, but it’s extremely hard.”

In October, the Cuban government reported that inflation had risen 40 per cent over the past year and had a significant impact on the purchasing power for many on the island.

While Fajardo managed to buy vegetables, rice and beans, she still has no meat for Christmas or New Year’s Day.

The shortages are among a number of factors stoking a broader discontent on the island, which has given rise to protests in recent years as well as an emerging migratory flight from Cuba.

The dissatisfaction was made even more evident during Cuba’s local elections last month, when 31.5 per cent of eligible voters didn’t cast a ballot, a far cry from the nearly 100 per cent turnout during Fidel Castro’s lifetime.

Despite being the highest voting abstention rate the country had seen since the Cuban revolution, the government still hailed it as “a victory.”

“I feel an enormous dissatisfaction that I haven’t been able to accomplish, through leadership of the country, the results that the Cuban people need to attain longed-desired and expected prosperity,” he said.

On Friday, a long line of Cubans waited outside an empty state-run butchery, waiting for a coveted item: a leg of pork to feed their families on New Year’s Eve.

About a dozen people The Associated Press asked for an interview said they were scared to speak, including one who said “it could have consequences for us.”

Estrella, 67, has shown up to the state butcher every morning for more than two weeks, waiting her turn to buy pork to share with her children, grandchildren and siblings. So far, she’s come up dry.

Although pork is available to buy from private butchers, it’s often far more expensive than at state-run facilities, which subsidise prices.

So she waits, hopeful that she’ll be able to cook Cuba’s traditional holiday dish.