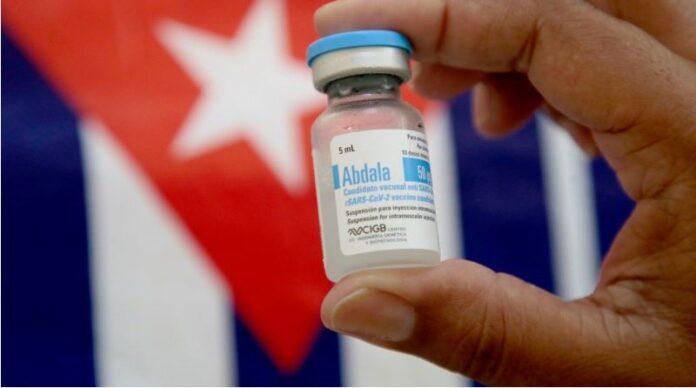 Saint Lucians and CARICOM citizens anxiously awaiting Cuba’s COVID-19 vaccines have been reassured they will not be disappointed.

According to the TeleSUR news agency, the assurance came while the leaders met in Mexico Saturday for the 6th Summit of the Community of Latin American and Caribbean States (CELAC) to discuss, among other things, the impact of the COVID-19 virus on the region and how to respond.

Cuba has developed five COVID-19 vaccines, three of which are approved by the World Health Organization (WHO) and two still Candidate Vaccines.

Among those approved is a nasal spray, popular among those fearing vaccine needles.

Cuba, whose biotechnology accomplishments are quite advanced and has refused to import vaccines, has been testing the approved vaccines on its own population first.

It’s vaccines are in full deployment across the island, where the Delta variant has caused similar spikes as everywhere else.

According to the Cuban news agency Prensa Latina, Cuban President Miguel Diaz-Canel assured fellow regional leaders they will get Cuban vaccines to help fight the pandemic in the region.

He also noted that the Cuban biotechnology industry’s production of the five vaccines was only possible “thanks to the vision of the late Cuban President Fidel Castro, to promote scientific and technological development” on the island.

Cuba has a history of developing early medicines to fight COVID-19, its scientists assisting Chinese counterparts in developing the first antidotes that followed the late-2019 outbreak in Wuhan.

The Cuban and Chinese also jointly-produced an early “cocktail” drug that proved effective in beating early symptoms of the COVID-19 virus back soon after it was declared a pandemic.

Saint Lucians and CARICOM citizens, with long experiences of benefiting from reliable Cuban health assistance, have developed an element of trust that’s seen many opting to await Cuban vaccines, instead of taking Oxford-AstraZeneca and Pfizer, the two main brands available.

But while the confidence in Cuba is strong, the wait is also relatively long — and the harmful effects the Delta variant has been heightening regional anxieties and expectations.

Havana is, however, also cautious about observing the usually lengthy but necessary clinical trial processes.

Meanwhile, vaccination rates remain far from satisfactory in The Americas region, which has seen more COVID deaths than any other, while G7 and European Union (EU) member-states remain unwilling to start delivering seriously on the billion vaccines long promised to developing countries.

Only five percent of the promised billion doses have been delivered to date to the UN’s COVAX distribution facility, while the US and UK have decided to provide third-dose ‘booster jabs’ to persons already vaccinated.

Meanwhile, the 92 nations identified by the WHO to be assisted through its COVAX facility continue to wait, while the US and UK have started rolling-out the third-dose vaccinations.

London will give the so-called “Booster jabs” free to all British nationals over 50, as well as to children between 12 and 15 (with or without parents’ consent).