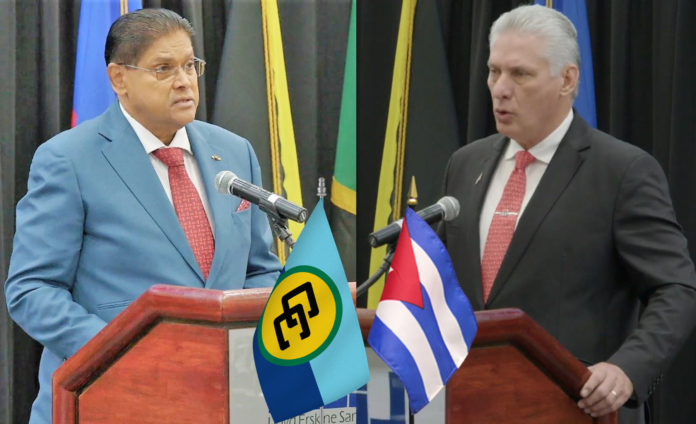 Cuba has accepted an offer from the Caribbean Community (CARICOM) to join the Community’s Ministerial Task Force on Agriculture. Both sides also agreed to observe October 6 as CARICOM Cuba Day Against Terrorism.

These were among the major outcomes of the 8th CARICOM-Cuba Summit held in Barbados on Tuesday as the 50th Anniversary of diplomatic ties was celebrated.

A Declaration was issued following the meeting which outlined the areas of agreement and co-operation.

CARICOM’s Special Ministerial Task Force on food production and food security was established to propel the Region’s thrust towards reducing its food import bill by 25 percent by 2025.

The participation of Cuba is a boost particularly to the technological aspects of the initiative. Closer collaboration with Cuba in the area of agriculture will include the establishment of a food terminal to provide a consistent supply of food items to Cuba.

The Heads of State and Government declared October 6 as the CARICOM-Cuba Day against terrorism in memory of the 73 people who died including CARICOM and Cuban nationals in the bombing of the Cubana Airlines in the waters off Barbados on October 6, 1976, and for which there has been no accountability.

Later in the day they laid wreaths during a ceremony at Payne’s Bay where there is a monument in memory of those who died in the explosion.

Cuba announced further assistance to CARICOM Member States in the fields of Health and Environmental Management.

This includes a supply of vaccines and training in epidemiological surveillance, nursing and medical specialties, the rehabilitation of coastal areas through a project funded by South Korea and the preservation of coral reefs.