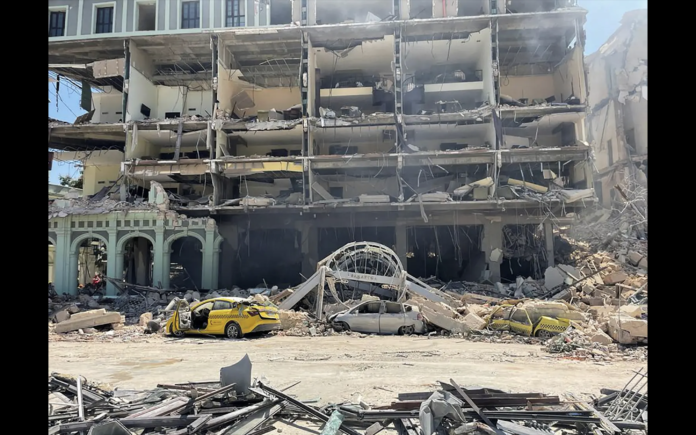 A powerful explosion rocked a five-star hotel in the center of Havana, Cuba, on Friday morning, killing at least four people and sending survivors scrambling for safety as authorities raced to try to rescue those trapped in the rubble, reports said.

At least 19 people were injured and 13 others reported missing, the Guardian said.

A Twitter account for the Cuban presidency reported a “liquefied gas explosion” as the possible cause for the deadly incident, but further details were not released, the Miami Herald reported.

The explosion leveled cars and buses parked in front of the posh Hotel Saratoga in downtown Havana, CNN reported.

At least three floors and the facade of the 1930s-era hotel were reduced to rubble by the blast, the news station reported.

A student who lives in the city told NBC News that the blast was strong enough to wake him up.

“I was at home and heard a loud noise, and I stood in my balcony and looked in that direction,” the unidentified student told the news network. “It was a large explosion. I felt it, I was asleep and it woke me.”

According to its website, the hotel is a “luxurious neoclassical architecture style” hotel that’s located on the Paseo del Prado in Old Havana.

The facility was refurbished and reopened in 2005.

Here Are Some Helpful Crypto Investment Advice For Beginners