The Office of National Drug and Money Laundering Control Policy (ONDCP) has defended the uniforms used by its members during an operation here earlier this week that resulted in the seizure of more than EC$11 million (One EC dollar=US$0.37 cents) worth of cocaine.

On Wednesday members wearing ski masks during an operation in which they arrested 41-year-old Deon Perkins, who was travelling in a van allegedly loaded with more than 740 pounds of cocaine worth an estimated $11.8 million. 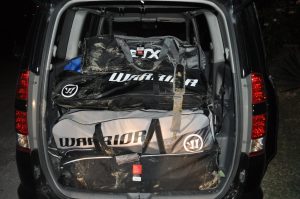 He is due to appear in court on Friday charged with unlawful possession, intent to transfer, being concerned with the supply of 740.8 pounds of cocaine and drug trafficking. If convicted, Perkins faces the possibility of life imprisonment.

Many people had called the media complaining about the dress mode of the ONDCP. Croft acknowledged the concerns especially at a time when criminals are impersonating law enforcement officials, nonetheless, he gave the public the assurance that every effort is being made to reduce any alarm.

Croft said the official officers’ clothing are marked ONDCP in the front and back and they also carry identification badges.

“So it is very clear who they are and what we’re doing,” he said.