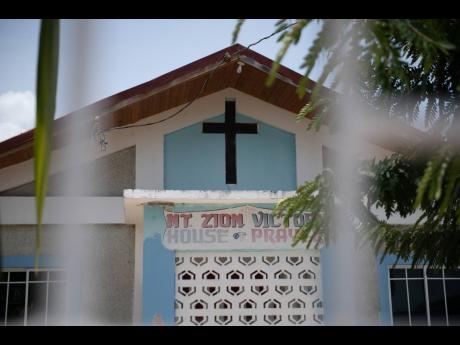 A 17-year-old girl decided to join the choir of the Mount Zion Victory House of Prayer in Sandy Bay, Clarendon, to “give them a hand” because of the flagging youth numbers in her mom’s church.

No sooner had she done so than she was singing a doleful tune: testing positive for the novel coronavirus, which has resurged in the central Jamaica parish.

Sandy Bay awoke on Independence Day to swarms of soldiers who had mounted checkpoints in the remake of a COVID-19 quarantine that had put another Clarendon community, Corn Piece, under lockdown on March 19 – nine days after Jamaica recorded its first confirmed case of the respiratory disease.

As the lockdown took effect on Thursday morning, it emerged that Mount Zion may have flagrantly flouted coronavirus health and social-distancing protocols that apply generically and specifically to churches. Almost all the congregants, The Gleaner was informed, did not wear face masks and many fellowshipped and socialised without caution.

The 17-year-old, whose identity The Gleaner will not reveal because disclosure is illegal and carriers of the virus often face stigma, said that it is believed that an ill deaconness may have been the host that triggered a forest fire of contraction in the church and beyond.

“She get sick, and dem haffi rush with her go to hospital. Her grandchildren go look for her. When dem go, dem find out she have the virus, but dem did a come a church when dem never know as yet.

“Her granddaughter was on the choir, and you know dem a go fellowship and go near people so … . A nuff a dem over deh have it,” the teenager told The Gleaner.

A crusade was reportedly held at the church from July 26-August 2, the teenager said, and it is believed that attendees from surrounding communities may have become carriers of the virus.

The communities of Rosewell and Terrace are believed to be potential hotspots of the highly contagious virus that has killed 706,000 people globally. There have been 12 fatalities in Jamaica.

The teen was incensed on Thursday that church administrators did not exert pressure on attendees to abide by the law. It is unclear whether attendees overshot the maximum seating capacity of the church in light of the six-foot distancing rules.

“Nobody nuh wear mask ‘cause dem nuh follow rules. A mussi one somebody over deh did a wear mask and a one next old lady. She nuh sickly, she alone. A greedy dem greedy mek dem have convention,” the teen said.

But by the time the teenage girl’s antennae shot up that the virus may have been at her doorstep, it was too late. She stopped attending the convention – but not soon enough. Her mother, an asthmatic, fell ill and was tested on Wednesday evening and was informed shortly after that she had tested positive.

About an hour after being initially interviewed by The Gleaner, the girl informed our news team that health ministry officials had just notified her of her result. She, too, was positive.

Her face was now a picture of dread and sombreness.

“Dem call and say I have COVID and that mi nuh must stay here. Dem say dem a go come here and inspect later on,” the teenager said, hinting that she and her family might be transferred to a state isolation facility to curb the prospect of spread.

With two of the seven-person household, which includes five children, already confirmed positive, the family is worried that the others may have contracted the disease.

The writing had been on the wall as the security forces reportedly began establishing checkpoints as early as 3 a.m. on Thursday.

The quarantine order will be maintained for 14 days, after which the community’s status will be reviewed.

There was no sign of Mount Zion’s pastors, at least one of whom reportedly lives in the Sandy Bay area. Several calls to her cell phone rang without answer.

Other residents said that they were not aware of the indiscipline at the church and were even more startled when they were aroused from the holiday slumber to the grim reality of a lockdown.

“The police and soldier dem lock down the whole place. My cousin get up fi open his shop, and dem tell him lock up immediately,” a resident told The Gleaner, speaking behind his fence.

Residents say that health officials were feverishly conducting house-to-house checks on Wednesday as contact-tracing teams tracked the genesis and movement of the virus to head off the threat of super spreaders intensifying the crisis.

“Yesterday (Wednesday), they (health workers) were here, and people from all bout inna the community come a test. That’s who want test ‘cause you know when it come to dem ting deh, no crowd ‘cause a nuh dance a keep. This morning (Thursday) now, mi hear say somebody nearby have symptoms,” a resident said on condition of anonymity.

He expects the numbers to rise.

A team from the Red Cross and the Ministry of Labour and Social Security combed the community to deliver care packages.

“We are seeing how best we can have the teams do distribution to the areas that were identified,” said Warren Green, acting manager at the Ministry of Labour and Social Security.