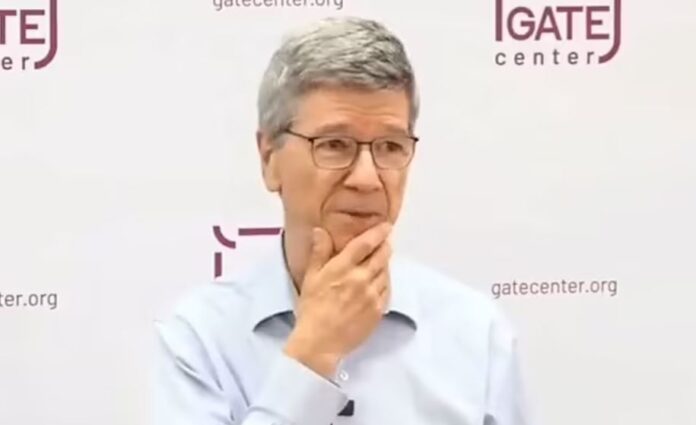 Covid leaked out of a laboratory in America rather than China, it has been sensationally claimed. CLICK HERE TO JOIN OUR WHATSAPP GROUP FOR NEWS UPDATES.

Famous US economist Jeffrey Sachs, who led a two-year probe into the pandemic’s origins, said he was ‘pretty convinced’ the virus was the result of ‘US lab biotechnology’.

The claim, made at a global conference last month, has been seized upon by Chinese Government officials who said it warranted a ‘thorough investigation’.

Professor Sachs, who was twice named one of Time magazine’s 100 most influential people in the world, admitted ‘we don’t know for sure’.

‘But there’s enough evidence that it should be looked into and it’s not being investigated — not in the US, not anywhere.’

He added: ‘I think for real reasons, they [US officials] don’t want to look under the rug too much.’

Critics have previously described Professor Sachs as a President Xi ‘propagandist’, dismissing China’s genocide of Uighurs and publicly calling for US cooperation.

It is unclear if Professor Sachs believes Covid originated in the US or was borne out of a collaboration between American and Chinese scientists in Wuhan.

China has faced its own accusations of covering up the origins of Covid.

Scientists were found to have wiped crucial databases and stifled independent investigations into a lab just miles away from the pandemic’s ground zero.

The virus first began spreading from a wet market in Wuhan, about eight miles from the Wuhan Institute of Virology (WIV) which worked with dangerous coronaviruses.

Researchers who fell ill with a mysterious flu-like virus months before the official Covid timeline were silenced or disappeared.

Professor Sachs is the chairman of the Lancet Covid-19 Commission, set up at the start of the pandemic to assist governments and scrutinise responses.

He oversaw a 12-man taskforce investigating Covid’s origins that was shut down in September 2021 when it emerged the team had financial links to the WIV.

The celebrity economist has said previously he believes the pandemic was the result of experiments done between Chinese and American scientists.

But until now, claims the virus was created in the US were confined to Chinese disinformation campaigns.

Speaking at a conference on June 15, Professor Sachs said: ‘I’ll add one provocative statement, it may shock you or not shock you, you may say “I already know that Professor Sachs”.

‘But I chaired a commission for the lancet for two years on Covid.

‘I’m pretty convinced it came out of US lab biotechnology — not out of nature — just to mention after two years of intensive work on this.

‘So it’s a blunder in my view — of biotech — not an accident or natural spillover.’

A video of the full conference, organised by Spanish globalisation think-tank Gate Centre, was posted on YouTube last month.

But his comments have been clipped and shared on Twitter by at least two Chinese diplomats in recent days.

Hua Chunying, the country’s assistant minister of foreign affairs, tweeted: ‘Given the heavy human and economic toll taken by the virus, don’t we owe it to the millions of lives lost to have a thorough investigation into US labs?’

A disinformation campaign launched by the Chinese Government last year claimed Covid originated from an American military base in Maryland.

It gained significant traction in China but was widely seen as an outlandish counter-claim by the rest of the world.

Serious questions have, however, been raised about the Wuhan facility’s links to Covid.

The lab was known to be conducting experiments on bat coronavirus strains similar to the one responsible for the pandemic in the months before the pandemic.

In public, mainstream media and academics in the West called the lab leak theory an unhinged conspiracy theory.

But leaked emails showed top scientists advising the UK and US Governments were expressing concerns about the official narrative privately.

Sir Jeremy Farrar, an eminent British expert who publicly denounced the theory as a ‘conspiracy’, admitted in a private email in February 2020 that a ‘likely explanation’ was that the virus was man-made.

The then-UK Government adviser said at the time he was ’70:30 or 60:40′ in favour of an accidental release versus natural origin.

In the email, sent to American health chiefs Dr Anthony Fauci and Dr Francis Collins, Sir Jeremy said it was possible Covid had been evolved from a Sars-like virus in the lab.

He went on that this seemingly benign process may have ‘accidentally created a virus primed for rapid transmission between humans’.

But the British scientist was shut down by his counterparts in the US who warned further debate about the origins of the virus could damage ‘international harmony’.

While publicly the group maintains that ‘all hypotheses remain on the table’ about the origins of Covid, the source said Tedros Adhanom Ghebreyesus, director-general of the World Health Organisation (WHO), had recently confided to a senior European politician that the most likely explanation was a catastrophic accident at a laboratory in Wuhan, where infections first spread during late 2019. CLICK HERE TO JOIN OUR WHATSAPP GROUP FOR NEWS UPDATES.