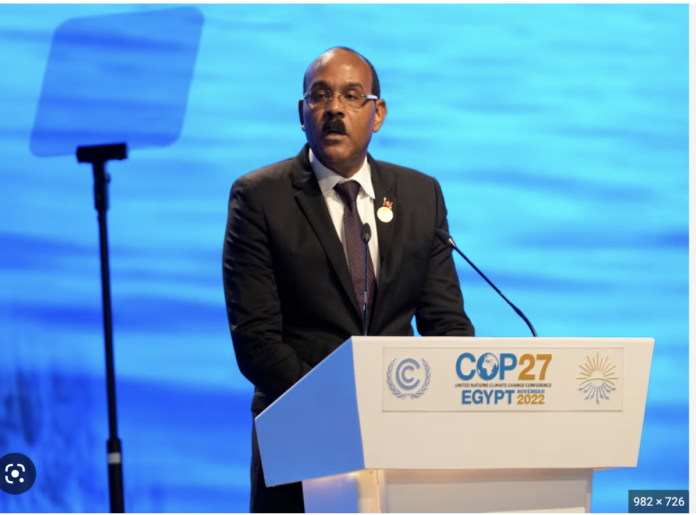 The first few days of any U.N. climate conference are dominated by a series of short speeches from heads of state from across the world. It’s something of a paradox, at least on its face: These presidents, kings and prime ministers are each country’s most prominent attendees, but the actual work of the talks ends up having little to do with the often-similar speeches given by the heads of state.

There is some variation, of course. This year, French President Emmanuel Macron expressed support for various climate financing proposals, including suspension of debt for disaster-struck developing countries. That would represent a big shift in a growing conversation about the spiral of debt that poorer countries will struggle to escape in a warming world.

And in a two-day sprint that includes words from everyone from the king of Jordan to the president of Kiribati, there are some from smaller countries and economies than France that still carry more weight in this particular discussion. For example, Gaston Browne is the prime minister of Antigua and Barbuda (population 100,000, roughly that of the Cheyenne, Wyoming, metro area).

He spoke Tuesday morning on behalf of the Alliance of Small Island States, a coalition of 39 countries that are among the most vulnerable to climate change. Among other things, Browne called for a crackdown on the fossil fuel industry’s continued monumental profits.

“The oil and gas industry continues to earn almost 3 billion United States dollars daily in profits,” he said. “It is about time that these companies are made to pay a global carbon tax on their profits as a source of funding for loss and damage. … While they are profiting, the planet is burning.”

World leaders have intervened beyond just speeches during the first few days of the annual talks. Famously, when the highly anticipated COP15 meeting in Copenhagen was teetering on the edge of failure in 2009, President Barack Obama traveled to Denmark on the conference’s last official day. Through a series of meetings with other leaders including those of India, Brazil and South Africa, the admittedly disappointing Copenhagen Accord did emerge.

Beyond that sort of skin-of-the-teeth intervention, though, many remain unconvinced that the parade of presidents and prime ministers offers much to the world.

“The COP has turned into a PR event, where leaders are giving beautiful speeches and announcing fancy commitments and targets, while behind the curtains governments of the Global North countries are still refusing to take any drastic climate action,” said climate activist Greta Thunberg during last year’s COP26 in Glasgow. “Change is not going to come from inside there. That is not leadership.”