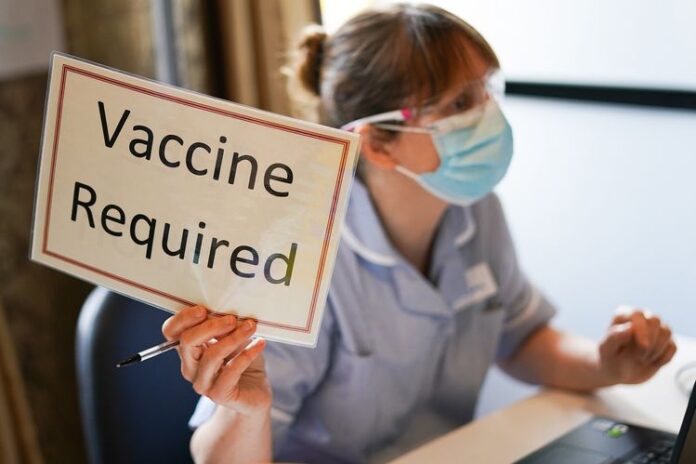 JAMAICA GLEANER: Consultant bioethicist Dr Derrick Aarons has described as “unfortunate” that 70 per cent of Jamaicans canvassed in an RJRGLEANER-commissioned Don Anderson poll are opposed to mandatory COVID-19 vaccination.

Vaccination has been a thorny issue stoking division in Jamaica and across the world, spurred by emboldened advocacy by an army of anti-vaxxers as well as hesitancy about the efficacy of the inoculants.

Aarons believes that persons who resist getting the jab should stay home.

“Persons who are against that position are selfish – they only think of themselves, their own fears and their own health. … Once they move beyond their own concerns, ethics comes in. Ethics really says, how should I conduct myself in the presence of others?” said Aarons.

Aarons, a Jamaican based in the Turks and Caicos, explained that the Government has a right to mandate the ground rules of citizen interaction in public spaces.

“Once you want to go out to the restaurant, supermarket, church, to go on a bus or take a taxi, then the government has a right to say you must protect yourself in an effort to protect your brother,” he added.

Prime Minister Andrew Holness has said that mandatory vaccination could not be imposed until a public education campaign was exhausted but has indicated that the measure will be implemented in the future.

Come October 1, a policy of mandatory vaccination will take effect in Antigua and Barbuda under the Gaston Browne administration..

Additionally, people entering the country’s borders will be denied entry unless they have received at least one dose of the vaccine.

Aarons asserted that Jamaica should take similar actions as its Caribbean neighbour.

The Don Anderson poll was conducted between August 19 and September 3 among 1,003 Jamaicans.

It has a margin of error of plus or minus three per cent.

Though the majority of Jamaicans, or 66 per cent, have no preference for either of the three brands available, 56 per cent, or more than half of those who do, favour Pfizer.

Preference for Pfizer was followed by the one-shot Johnson & Johnson vaccine and Oxford-AstraZeneca, with 22 per cent and 11 per cent, respectively.

The pollster noted that vaccine hesitancy or resistance could be brand related.

More than 200,000 doses of the Pfizer COVID-19 vaccine were earmarked by the Government to prioritise the vaccination of children 12 years and older.

On September 15, Jamaica suspended its administration because of a shortage. Vaccination is set to be resumed when a shipment arrives from the United States in two to three weeks.

In his address to Parliament on Wednesday, Prime Minister Andrew Holness said that it is not the intention of the Government to encourage vaccine preference.

“When the new stock comes, the strategic direction will be strictly maintained. This will not be widely available to everyone because we cannot guarantee that we will have the supplies for everyone, and the strategic intent is to ensure that we can return our children back to school,” Holness said.

Jamaica is targeting the immunisation of 1.9 million people to achieve herd immunity of 65 per cent by March 2022.

On Wednesday, Holness said that 208,169 people, or seven per cent of the population, have been fully vaccinated.