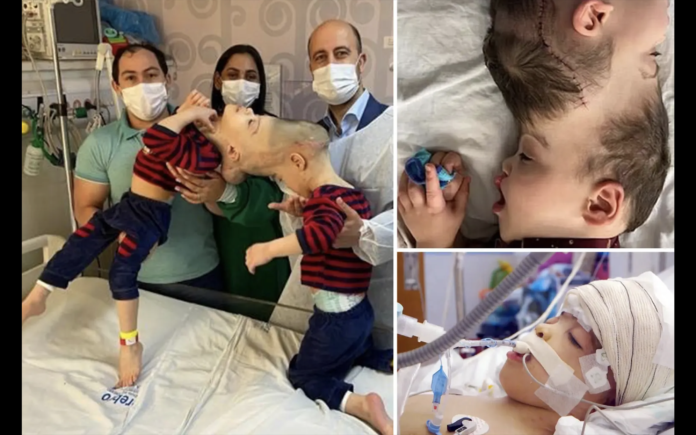 “There were a lot of tears and hugs,” Dr. Jeelani told PA Media after the operation was completed. “It was wonderful to be able to help them on this journey.”

Twins born with a conjoined cranium are incredibly rare, accounting for only 1 in 2.5 million live births, according to the National Institutes of Health. Only 30% of those survive the first month of life.

Therefore, surgeons performing separation procedures don’t have a wealth of prior experience to draw upon, making the operations incredibly risky.

In order to prepare for the procedure on the Lima twins, medics spent months using virtual reality projections to trial their surgical techniques — something that proved instrumental when it came time for the actual operation.

“It’s really great to see the anatomy and do the surgery before you actually put the children at any risk,” Dr. Jeelani explained. “You can imagine how reassuring that is for the surgeons.”

During the procedure, a team of surgeons was set up in a “virtual-reality room” in London and liaised with surgeons in Rio who were wearing headsets and performing the actual operation.

“In some ways, these operations are considered the hardest of our time, and to do it in virtual reality was just really man-on-Mars stuff,” Dr. Jeelani explained.

Dr. Jeelani was in Rio and only took four 15-minute breaks over the course of the 27-hour operation. He admitted he was “shattered” by the end of the surgery.

But the payoff was well worth it, with the Lima family feeling “over the moon” after the boys were successfully separated.

In the aftermath of the surgery, the twins were suffering from high blood pressure and dangerously high heart rates. Heartwarmingly, however, their stats returned to normal once they were reunited and were able to hold hands.

The Lima twins now face six months of recovery before they’ll be able to do the same activities that other toddlers can do.

The miracle surgery is not the first involving conjoined twins to make headlines in recent years.

Closer to home, Ballenie and Bellanie Camacho were successfully separated at a hospital in Westchester, New York in 2017 after an epic operation that took 22 hours.

The twins, who were joined at the back, are now 6-years old and said to be “thriving.”