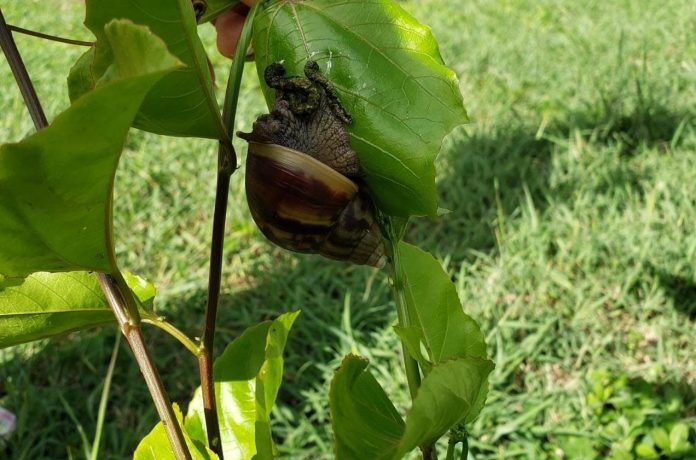 A project of the Inter-American Institute for Cooperation on Agriculture (IICA) will support the Ministry of Agriculture, Fisheries and Barbuda Affairs (MoAFBA) in the management of giant African snails through strategic technical approaches that involve the local communities.

The project launched as a call to action, will incorporate activities including seven town hall meetings in strategic communities in and around Antigua and Barbuda where residents will be given an opportunity to voice their concerns and share useful information.

The Chief Plant Protection Officer of Antigua and Barbuda, Janil Gore-Francis, said “in the past, initiatives that were executed did not generate the expected results, in part, due to the lack of community involvement. “There are persons who were trying their best to deal with the issue but their neighbors are not doing the same thing and they are suffering from re-infestation.”

The project contemplates an impact assessment through questionnaires applied to hoteliers, farmers and homeowners to quantify the impact of the Giant African Snail, through the assistance of the Data, Research and Statistic Unit within the Ministry of Agriculture.

IICA will also support the production of a public service announcement, as well as the production and distribution of educational brochures. Input and supplies will be distributed to the communities that come together as a group to combat the snails.

“The presence of the giant African snail has seriously compromised food security in Antigua and Barbuda, impacting our families, homes, communities and agriculture,” Hon. Minister of Agriculture, Dean Jonas.

The project is part of a new strategy of the Institute to address the challenges of agriculture and rural territories through rapid and convincing responses in the Caribbean countries.

Newly appointed IICA Representative in Eastern Caribbean States (ECS) IICA Representative, Gregg Rawlins reaffirmed the Institute’s support to the Ministry through technical support programmes which address priority issues such as this, which is affecting the agricultural health and food safety of Antigua and Barbuda.

The Giant African Snail was officially identified in Antigua on April 2008, following a report received by the Plant Protection Unit of an infestation in the Jolly Hill area within the community of Bolans. To date the snail hasn’t been identified in Barbuda the sister island of Antigua.