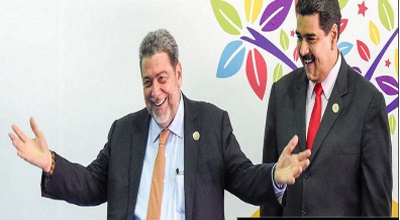 In an attempt to stop medical and food aid reaching the starving and sick people Nicolas Maduro has ordered the military to close border crossings with both Brazil and Colombia.

Today at one of the Colombia closed border crossings the sound of rapid gunfire echoed near the Simón Bolívar bridge, where Venezuelan authorities also shot volleys of tear gas. Medics near the bridge were treating dozens of people from tear gas inhalation and the stampede that retreated when canisters were fired. Sporadic gunfire could be heard in other zones near the western border. Opposition leaders on the Brazilian border also reported the live fire by security forces.

The words of Kleibysad Saab, a 47-year-old Venezuelan from the state of Carabobo, lead a crowd in chants of “freedom” before offering a prayer. “No man can close the doors that God has opened,” she said. “Here we go!” The crowd roared an amen. Ref: ditto.

Tonight [Saturday] trucks which managed to cross the bridge with food and medical supplies were torched and set on fire on Maduro’s instructions. Starving and sick people watched as their life saving aid was burnt before their very eyes. What collection of wicked trash would do such a thing on Maduros orders and with all the left wing ALBA Apparatchiks cheering and watching on TV.

Far from Venezuela in Saint Vincent and the Grenadines [SVG] the ALBA leading Apparatchik Dr. Ralph E Gonsalves prime minister of SVG, in recent comments denounced the interventionist attitude of the United States in a country [Venezuela] where free and fair elections were held. But everyone in the World today except him and perhaps a few other Apparatchiks know that the elections in Venezuela were not fair and free.

Gonsalves said “You know, [in Venezuela] we had a Caribbean electoral mission on May the 20th, a few days before the election and then on the election day, and they declared the election to be free and fair,” said PM Gonsalves, adding that the people reflected their wills by electing Venezuelan President Nicolas Maduro.

But those are such silly comments coming from a man whose own elections and those of his party were declared the winners of the 2015 SVG national polls when observers also announced those elections to be free and fair, they were not, they were stolen. Currently, a case regarding voting irregularities is awaiting Judgment in SVG.

Gonsalves has spent much of his life as a Marxist-Leninist want to be revolutionary, calling the Americans nasty names and trying to put down the US whenever he could. Making comments in communist countries about the USA and its leadership, using the term Satan and  Empire in a derogatory way whenever he could to the applaud of people like Castro, Chavez, and Maduro. So for him to continue supporting Maduro in the face of millions of Venezuelans starving and dying through lack of food, medical supplies and being tear-gassed and shot by their own corrupt military is an embarrassment for SVG, the Caribbean, the hemisphere, and the World. The man is an international disgrace and will undoubtedly carry a curse for the rest of his life.

SVG has had to endure the most horrible times under the rule of this man, he has created a family dynasty where his family members get select government positions and top jobs.  The police force has become his own private army and security force, kicking down peoples doors and confiscating their belongings on fishing trips to try and find evidence against them, often for political reasons.

People have had their homes and business’s raided on the most doubtful of intentions. Police get search warrants which include the words “firearms, ammunition, drugs” when the police and the JP who signs the warrant knows that there has been no reason to believe that any such items exist at the raided premises. The words and description are used to allow the police to go on political fishing trips at people’s homes and business places.  Thousands of people have emigrated to escape the political malice and spite that abounds in SVG.  Before 2001 there were hundreds, maybe thousands of big spending ex-pats living in SVG, today there are virtually none.

Under Gonsalves watch, his buddy Maduro and Co have been money laundering through a banking company in Kingstown SVG. The Spanish government complained about money being sent to the left wing Catalonian breakaway candidate via this bank in SVG. The readers will be shocked to know who owns the bank.

According to a recent News 784 article, Gonsalves also said “I know what they’re [the Americans] doing should be investigated as a possible war crime. I mean, it’s terrible what they’re doing to the country [Venezuela] because of political or ideological reasons. This is the 21st century. We have to act differently.”

Sooner or later Gonsalves himself should be investigated and carefully scrutinized for his behavior and actions in SVG and elsewhere. One of the problems of listening to anything the man says is that he is a liar, and he self confirmed he was a liar when he said “I sometimes tell lies.” He has had accusations of sexual assault going back decades and has never been before a court to answer such allegations and charges. Both these matters are well publicized locally, regionally and internationally, so I am revealing nothing new. Such issues have appeared all over the world his infamy of untruthfulness precedes him.

Like Maduro, Gonsalves has paid and rewarded people who are loyal supporters, if a supporter by such reason can ever remain loyal once the cards fall?

The stench of people like Maduro and Gonsalves are polluting the Americas and the Caribbean and spilling over into the greater world. It’s time for them to go, and let’s not say goodbye, just good riddance.

Jolly Green, hoping to see a better future for all, the wicked shall fall by his own wickedness.