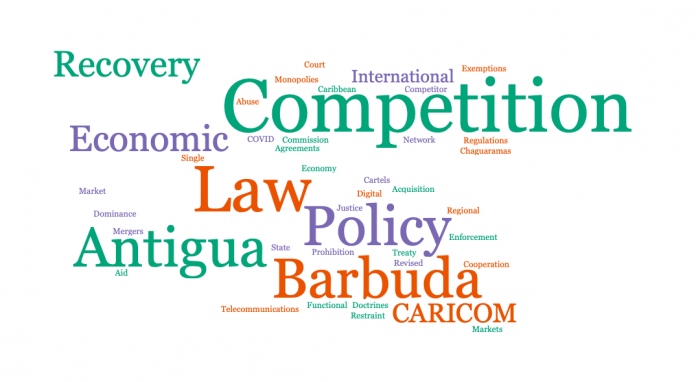 At the dawn of 2020, no one ever imagined that a coronavirus would lead to such global trauma of epic proportions in the form a COVID-19 pandemic and economic crisis. Governments around the world scrambled to implement containment and lockdown measures to thwart the further loss of life, protect individuals, and suppress the spread of the virus. As a corollary, much of the global economy grounded to a halt, giving rise to the loss of income, widespread job losses, production cuts, disruptions to supply chains, heightened uncertainty in both the public and private sectors, and much more. Even though these injuries of severe challenges and constraints will naturally heal when the pandemic is over, the wounds left require treatment. This treatment must be grounded in a holistic socio-economic recovery plan of solutions led by the Government and key stakeholders.

Commendably in this regard, the Government of Antigua and Barbuda established the Economic Recovery Committee (ERC) to charter Antigua and Barbuda’s way out of the economic fallout and back onto the road of growth and development. Also, across various social media platforms, there are conversations about the way to move forward, above and beyond the pre-pandemic status quo. However, left out of these discussions is the possibility of introducing competition law and policy (also known as antitrust) as a regulatory and development governance tool to fashion a more inclusive and certain market for all going forward. The overlooked reality is that the pandemic is being or will be used as a cover for anticompetitive business conduct and arrangements resulting in harm to consumer protection and welfare. These issues prompted competition regulators in many jurisdictions to play a more critical role in stamping out opportunities –now and on the other side of the pandemic– for unjust enrichment and economic subversion. Antigua and Barbuda is yet to establish such a regulatory regime. As such, there is room for competition law and policy to be one of the pillars in an economic recovery strategy.

So, what exactly is competition law and policy? Well, competition law and policy concerns reining in, through regulation, practices that are harmful to the fair, competitive processes between undertakings (i.e. entities) operating in traditional and digital markets. The idea is that undertakings, whether public or private, can inflict harm on their competitors, costumers (i.e. business-to-business), and average consumers. The injuries inflicted can come in the form of unjust price increases, resale price maintenance, price-fixing, cartels carving up the market, predatory pricing, refusal to supply or deal, and other discriminatory practices. There are situations where entities abuse their market power through exclusionary and exploitative conduct or seek to distort competitive markets through questionable mergers and acquisitions with detrimental effects on prices and market equilibrium. Also, there are cases in which subsidies place certain entities in an advantageous position to the detriment of others.

Undoubtedly, many of the highlighted anticompetitive practices are recognisable and may very well be contributors to the high cost of living and inefficacy of doing business. In combating these harms, competition law and policy would weed out of the markets in an economy anticompetitive agreement, abuses of substantial market power, mergers and acquisitions with adverse effects, and unlawful state aid. In doing so, major companies like Microsoft, Google, Apple, Amazon, Facebook, GlaxoSmithKline, United Brands, British Airways, Visa, Mastercard et al. were forced to ensure that competitors, costumers, and average consumers benefit from better market equity, lower prices, higher quality goods and services, increased innovation, better choices, and greater allocative and production efficiencies.

Globally, the tentacles of competition law and policy continue to expand institutionally and substantively across more than 130 systems. Competition law has been around for some time now as it roamed the antique common law through the restraint of trade doctrine. In the United States, antitrust became formalised under the Sherman Act 1890 and in the European Union (EU) (then European Community), competition law and policy at the supranational level came into being through the Treaty of Rome in 1957. Here, I should note that the US and the EU are the two major and most influential competition systems in operation today, reflecting their global economic influence. At the domestic level, the establishment of many national authorities in Europe and the developed world took off between the 1940s-1950s. Later on, between the 1980s-1990s, systems in the developing world came on stream in India, Singapore, Brazil, South Africa et al. in proportion to their economic growth and development.

Interestingly, there is another layer of competition law and policy which forms part of regional integration systems and creates a legal regime above member states at the transnational level as hinted with the EU and its supranational approach. Where there is not a supranational approach, there is an intergovernmental approach as per the Caribbean Community (CARICOM), Association of Southeast Asian Nations (ASEAN) and others which operate on the basis of functional cooperation. Furthermore, authorities in their respective jurisdictions worldwide work together, tackling cross-border issues, through the International Competition Network (ICN). The wide recognition and layers of competition law and policy are attributed to the fact that the core functions and objectives are vital to socio-economic governance in developed and developing economies.

The core functions and objectives ground themselves in certain developmental principles and values. For example, consumer protection seeks to maximise consumer interests and welfare by taking action against offending undertakings and requiring them to reduce their prices, void harmful agreements, and terminate detrimental business conduct. The redistribution objective aims to democratise markets by sharing the wealth out of concentrated hands and promoting economic equity, which is particularly vital for establishing an entrepreneurial class in a small island developing state. Also, protecting competitors encourages more firms to enter and operate in a market to give everyone a fair chance by breaking down barriers to entry and levelling the playing field for existing undertakings. Furthermore, at the supranational or intergovernmental level, there is the single market imperative which aims to guarantee fairness between members states and their industries. This is particularly critical for the free movement of goods, people (albeit limited under Revised Treaty of Chaguaramas (RTC)), capital, data, and the freedom of establishment. The functions and objectives are about tearing down national divisions, lifting knees from the necks of disadvantaged small to medium-sized undertakings and allowing them to fulfil their potential across larger and more inclusive markets and economies.

In the Caribbean, the tenants of competition law and policy are regulated and enforced by national competition authorities or government divisions in Barbados, Belize, Guyana, Jamaica, St. Lucia, and Trinidad and Tobago. At the level of CARICOM, the CARICOM Competition Commission (CCC) enforces the rules under Chapter 8 RTC to harness the benefits of the CARICOM Single Market and Economy (CSME) through combating anticompetitive and abusive business conduct. This is also fundamentally supported by two other regional treaty institutions: Council for Trade and Economic Development (COTED) and the Caribbean Court of Justice (CCJ). COTED establishes appropriate rules and policies for competition, including special carveouts due to the unique market situation in the Caribbean and the CCJ interprets and applies CARICOM competition law in light of the spirit of the RTC. On this point, the CCJ will have to balance the potential conflicts between the domestic and regional regimes as a final appellate court and as the chief judicial institution of CARICOM. Nonetheless, thus far, the CCJ’s competition jurisprudence continues to slowly develop even after its first judgment in Trinidad Cement Ltd v CCC.

With all that said and to bring the discussion home, Antigua and Barbuda does not have a formalised competition regime. A possible reason for this is that competition and law policy was not seen as a necessary governance and development tool, but this means that there are possibly large swathes of the economy where anticompetitive practices run wild with impunity. The closest regime that exists is that governed by the Consumer Affairs Department albeit with underwhelmingly limited statutory competences and powers. Also, there is a proposal for a system at the level of the Organisation of Eastern Caribbean States (OECS), but that is still on the table for discussion. I would argue for the preference of establishing national authorities as an OECS system might be an unnecessary layer which duplicates the efforts and takes resources away from of the already established CCC. Moreover, an OECS regime might not be effective on the ground in the jurisdictions due to practical issues concerning regulation and effective enforcement.

A potential regime sits within the Telecommunications Bill under Sections 81-83 which seeks to promote, develop, and enforce fair competition and equality of treatment of licensees in the telecommunications market. This regime will be governed, as proposed, by the National Telecommunications Regulatory Commission (NTRC). This is revolutionary and has the potential for telecommunications policies to yield significant benefits for Antiguans and Barbudans, natural and legal, to better live and operate in the digital age. Yet, there is a potential conflict with the Antigua Public Utilities Authority (APUA) and its welfare and national security function as a monopoly in addition to the interest(s) of another operator. Both own much of the current infrastructure at a high cost to market entrants and existing operators. Notwithstanding, competition law can allow fairer access under the ‘essential facilities doctrine’. Nonetheless, regarding APUA, balancing competition concerns with those of legitimate national security interests requires consultation between decision-makers and with stakeholders and the general public.

Moreover, there are broader issues concerning setting up a more comprehensive national authority and network, chief among them, the lack of resources –human and otherwise– given the current situation. Also, given the uniqueness of a small island market, policies concerning natural monopolies and other business conduct must be adequately examined in light of national economic interests. Added to this, intervening political considerations (as is the case everywhere) will result in some reluctance to introduce a robust regime. However, there are tangible socio-economic benefits such as additional revenue through fines, lower cost of living, increased economic efficiency and innovation, increased attractiveness for foreign direct investment, and greater economic diversity.

In conclusion, competition law and policy developed around the world as a regulatory governance and development tool utilised to protect competitors and consumers. There are also holistic functions and objectives in which competition law and policy can meaningfully play in rebalancing and democratising markets, the economy, and economic interests. This is vital in ensuring that economic and legal strategies can support the establishment of a less vulnerable and more certain economy coming out of the COVID-19 pandemic in conjunction with efforts at the regional level. Certainty is needed to ensure that those who hold economic power do not use it together with the effects of the economic fallout to the detriment of others. Many small to medium-sized undertakings need to have the surety that not only can they recover from the current situation, but they can also sustainably operate and grow in the period after. With that said, establishing such a system is not without philosophical and practical challenges. Nevertheless, the overarching goal is for each to endeavour and all to achieve. With COVID-19 unveiling critical faults within markets and the developmental model upon which they languish, room should be made for competition law and policy to be part of the economic recovery from the COVID-19 fallout leading to an economy that works for many and not just for the few.

All views expressed herein are the author’s personal views and do not reflect the views of any organisation(s) or other entities with which he may be affiliated.