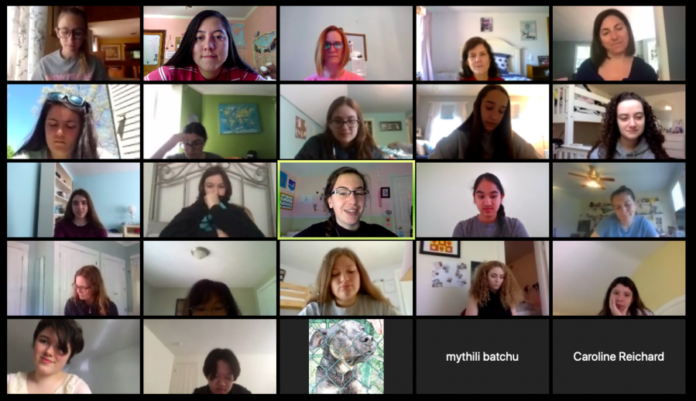 Colleges around the country are worrying about outbreaks of the coronavirus, leading some to pivot online and cancel events, and others to abruptly change rules on campus in the waning days of the fall semester.

At Cornell University, where cases of the omicron variant have been confirmed and many more are suspected, more than 1,100 students tested positive for the virus this week. The spike led school officials to switch final exams online, close libraries, and call off activities, including a ceremony for December graduates.

In the nation’s capital, George Washington University officials announced on Wednesday that all in-person social gatherings and events were canceled effective immediately, and remaining exams for the semester would be held online starting Friday. The school had said a day earlier they would require booster shots after the omicron variant was detected.

Across the country, many colleges are grappling with the fear of worsening pandemic conditions as they wrap up final exams and prepare to send students home for the holidays. And as they look ahead to the spring semester, many school officials are pledging to be agile as more data emerges worldwide about the rapid spread of the omicron variant.

The moves came as omicron continued its march across the United States, with the variant identified in at least three dozen states and the District — the latest threat to the nation from a virus that has claimed 800,000 lives. But Anthony S. Fauci, director of the National Institute of Allergy and Infectious Disease, said data shows that booster shots continue to offer a strengthened shield of protection against the variant and that an updated vaccine targeting omicron is not needed.

Most schools have remained in session with classes in-person on campus all throughout the fall semester, a welcome return to almost-normal after a brutal and isolating pandemic year. But the last days of the semester have had some school officials on edge, raising questions about whether even campuses that have been vigilant about vaccinations, masks and other measures might find themselves vulnerable once again.

College officials are hoping for answers to some key questions, including how much protection vaccines offer, the severity of the disease with the omicron variant and its transmissibility.

“It is changing quickly,” said Lynn Goldman, dean of the Milken Institute School of Public Health at GWU.

No procedural changes have been made yet for the spring semester, according to GWU’s announcement Wednesday. Goldman said officials had documented two cases of the omicron variant in the GWU community, and probably have far more than that by now, as sequencing runs a few days behind. Within a few weeks, she anticipates, they will have dozens. “That’s what we’ve seen with omicron in other parts of the world.”

The omicron variant has now been detected at multiple colleges, from the University of Southern California to Georgetown. Others, such as the University of Texas at Austin, have warned of several cases suggestive of omicron. The Centers for Disease Control and Prevention warned Tuesday that new modeling indicated that the prevalence of omicron nationally increased sevenfold in a single week.

Omicron spreading rapidly in U.S. and could bring punishing wave as soon as January, CDC warns

Sarah Van Orman, chief health officer at the University of Southern California and a past president of the American College Health Association, said it’s not a surprise that omicron is being detected at colleges because of the amount of testing some schools are doing and the ability some have to analyze for variants.

The rapid succession of news about colleges shutting down in-person events evoked memories of March 2020 for some, when universities were among the first to alert the country that the pandemic would upend life as we knew it. Several college officials said they are hoping that vaccines, boosters and other proved mitigation strategies will help avoid that kind of wholesale reversal.

“It’s like deja vu — here we are again,” said Gerri Taylor, co-chair of the American College Health Association covid-19 task force. She said the list of schools requiring boosters was increasing by the hour. “We all want this to be over, we really do. But we can’t wish it away — it’s here, and we have to deal with it.”

For Jack King, a senior at GWU, the changes feel reminiscent of 2020, as well. “I’m really nervous about what it means for next semester,” said King, who is studying political science and American studies. “I’m hoping that with the booster mandate — and we have masks on campus and, as of now, everyone gets tested every two weeks — I’m really hoping GWU will do everything it can to keep us in person.”

Some campuses, including USC, have seen a surge in coronavirus cases after students returned from Thanksgiving travel, a result many anticipated and prepared for with testing and isolation measures for infected individuals.

At Cornell, where 97 percent of students are vaccinated, recent days have been startling.

As December began, a bump in cases after the holiday seemed to be leveling off, said Peter Frazier, an engineering professor and the lead expert who developed Cornell’s coronavirus response modeling.

But as the semester began to wind down, and as classes ended and students prepared for finals, they continued to see more cases — and preliminary evidence suggested many could be the omicron variant.

On Saturday, school officials canceled student activities and urged vigilance with coronavirus precautions. On Monday evening, they found that a very large fraction of the recent positive tests had the hallmark of omicron, Frazier said.

Eric Topol, professor of molecular medicine at Scripps Research, shared on social media data published by the Cornell Daily Sun about the jump in coronavirus cases. He said the figures suggest the Cornell community could be the location of the first superspreader omicron event in the United States. Fortunately, he said, most people on campus are vaccinated.

Only two cases of omicron have been confirmed as of Tuesday, but the rapid rise of potential cases of the variant led university officials to raise the alert level, move finals online and cancel events.

Martha E. Pollack, Cornell’s president, stressed in her message to the campus Tuesday that more than 97 percent of students were free of the virus and that they had not seen serious cases of illness, but that they wanted to limit the spread of infections.

Among other schools announcing changes: The University of Pennsylvania switched finals online this week and canceled indoor social events. Stanford University announced last week that student parties would be limited when students initially return to campus in January. Tulane University in New Orleans, reinstated a mask mandate and offered undergraduates the option to finish the semester remotely.

At Vassar College in New York, social gatherings were canceled and school officials announced they would remove chairs and tables from inside dining areas, urging students to eat alone or with their roommates. They expanded coronavirus testing, pushed some final exams online, and ensured others are in rooms large enough for social distancing.

Elizabeth H. Bradley, the president of Vassar, said they have not found omicron cases, “but we are expecting it, as … everybody who’s alive today is expecting it.”

In the District, American and Georgetown universities will require faculty, staff and students to get booster shots for the spring semester, officials on both campuses announced this week.

At Georgetown, the policy change came a day after officials reported a case of omicron in the community. The person who tested positive was fully vaccinated, asymptomatic and had recently returned from domestic travel, Ranit Mishori, vice president and chief public health officer, said in a message to the campus on Monday.

The campus in Northwest Washington logged 34 cases of the virus on Tuesday, the school’s highest single-day total, officials reported Wednesday. The school announced new safety measures, including a transition to grab-and-go meals and a ban on eating in communal spaces. Fitness centers will be shuttered and indoor university-sponsored events will be moved outdoors or canceled, officials said.

Nearby, amid an uptick of cases at Howard University, leaders are urging students to get booster shots. Sixteen students, all fully vaccinated, recently tested positive, officials said Tuesday evening. None of the students have experienced severe symptoms.

Campus leaders said they are working with the District’s health department to sequence the test samples and determine if any variants, including omicron, are present. Tuesday marked the last day of the fall semester and officials said the current threat caused by the spike “has been mitigated,” as most students are either preparing to leave or have already left campus.

“Right now, we’re on the side of strongly recommending people get a booster,” Hugh Mighty, senior vice president of health affairs and dean of Howard’s medical school, said in an interview. But, he added, that guidance could change. “As the data comes in and as we follow what’s going on, then that will inform what we will do next.”

Officials at the University of Virginia say they are also keeping an eye on data.

“At this time, scientists here at U-Va. and around the world simply don’t have enough data about this new variant to make informed decisions about how to respond to it,” wrote Liz Magill, the University of Virginia’s provost, and J.J. Davis, the university’s chief operating officer, in a recent message to the campus.

The university is keeping its mask mandate in place, which requires individuals regardless of vaccination status to cover their faces in most indoor settings. But the way the virus evolves in the coming weeks — and especially over the holiday break — will determine how the campus moves forward, officials said.

A year ago, the emergence of a new coronavirus variant could have leveled a campus. The first year of the pandemic was marked by case surges and school closures.

But, with the protection offered by vaccines, the coronavirus is more manageable, officials say. More than 1,100 campuses throughout the country require students or employees to be vaccinated, according to the Chronicle of Higher Education, and many schools continue to enforce mask usage indoors.

“You should be respectful of the virus,” Mighty said. “We should not panic around the virus. We should treat it with what we’ve got.”