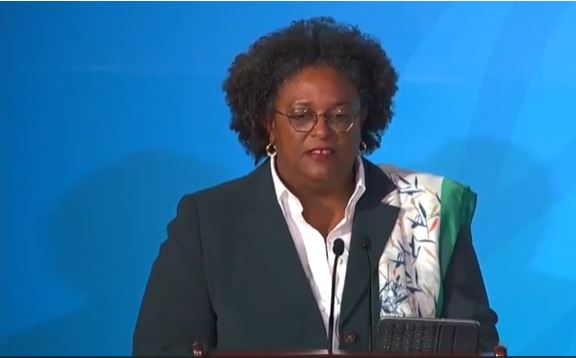 For several years, Caribbean countries have relied on Climate Risk Insurance as a tool for climate risk management and poverty reduction.

The impacts of loss and damage associated with climate change can set back development by potentially increasing not only the incidence, but also the severity of poverty.

By compensating for damages caused by extreme weather events, climate risk insurance helps individuals break out of a vicious circle of poverty and vulnerability.

But Prime Minister Mia Mottley says hurricanes Irma and Maria in 2017, and Dorian in 2019, have created a new reality for Caribbean countries – climate refugees.

“For us, our best practice traditionally was to share the risk before disaster strikes, and just over a decade ago we established the Caribbean Catastrophe Risk Insurance Facility. But the devastation of Hurricane Dorian marks a new chapter for us because as the international community will find out, the CCRIF, as we call it, will not meet the needs of climate refugees, or indeed will it be sufficient to meet the needs of rebuilding,” Mottley told the United Nations General Assembly – the UN’s annual gathering of world leaders – being held this week in New York.

“No longer can we therefore consider this as an appropriate mechanism. We have as well to look at how best we can blend our public resources and to that extent, our country has introduced natural disaster clauses in our bonds as have other countries in the region.”

According to Sir Ronald Sanders, Ambassador of Antigua and Barbuda to the United States and the Organization of American States, what the aftermath of Dorian in the Bahamas brought into stark reality, is that the phenomenon of climate change refugees in the Caribbean is not limited to Barbuda in 2017.

He noted that in the complete decimation of Barbuda, the entire population had to be evacuated to Antigua.  Similarly, large numbers of people had to be moved from the Abaco Islands where little was left to sustain livelihoods.

“These large movements of people were possible in the Bahamas and Antigua and Barbuda because they were done within the same national jurisdiction,” Sir Ronald wrote in a recent commentary.

“Refugees from Barbuda after Hurricane Irma were accommodated on Antigua and those from the Abaco Islands in the Bahamas have been billeted in Nassau. But, had the territory of the Bahamas not been a chain of islands and had Antigua and Barbuda not been a single state, the people from the Abaco Islands and Barbuda would have had to seek refuge outside of their own national borders.”

Sir Ronald said the possibility of an entire territory being decimated cannot now be ruled out in the future.

In the 30 years prior to 2017, 1.5 million people had been affected by floods and tropical storms in Belize, Grenada, Jamaica and Saint Lucia, causing well over US$5 billion in damage.

Mottley is also calling for a change to the current official development assistance rules, which she says focus on Gross Domestic Product (GDP).

“The Bahamas, despite its extreme vulnerability to climate change and despite the passage of Hurricane Dorian, would not have access to either grant or concessional resources as they begin the difficult task of rebuilding lives and livelihoods,” she explained.

“These rules were not developed for such as time as this and we need to change these rules that deny access to successful small countries, and we need to remove the bureaucracy attached thereto.

“But then again, if Dominica and Barbuda remain today without any meaningful assistance after Hurricanes Irma and Maria passed two years ago, we must ask ourselves if small states continue to remain invisible and dispensable to the global community,” she added.

Mottley said the pledges made for Barbuda represented less than 10 per cent of the money they needed to rebuild, and even then, they have not collected those pledges.

Similarly, she said Dominica, in the first 12 months after the catastrophe, was only able to access less than 10 per cent of the pledged funds.

“As I said in Geneva last week, the world finds it possible to apply resources to get rid of male baldness while it cannot find resources to cure malaria. These misplaced priorities will lose us the battle,” Mottley said.