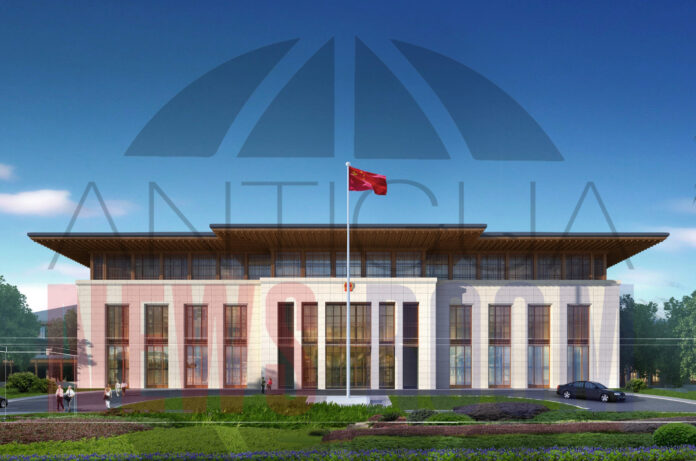 The People’s Republic of China is opening its purpose-built embassy in Antigua and Barbuda today as a symbol of the strong ties that currently exist between both countries.

The embassy is located at an area designated as Embassy Row by the government where it hopes to encourage other foreign governments to establish their embassies and consulates.

Prime Minister Browne said the five acres of land upon which the embassy was built was sold to the Chinese at the symbolic rate of EC$1.

The compound will house the embassy’s administrative offices and accommodations for the resident ambassador and other embassy staff.

The Antigua and Barbuda government has recognised the PRC as its most important developmental partner based on the magnitude of their support over several decades.

The two countries established diplomatic relations back in 1983.

The government says it remains committed to the “One China” policy which embraces principles of equality, equal benefit and respect for territorial integrity and sovereignty.

The People’s Republic of China has offered concessionary loans to Antigua and Barbuda under which several key infrastructural projects have been completed.

These include the new terminal building at the V. C. Bird International Airport, the redeveloped St. John’s Harbour, the Multi-Purpose Cultural Centre and the Bridge at
Big Creek.

They are located at Glanvilles and Villa.

The PRC is on the verge of launching a new housing development in the Point.

It is expected that after this project is completed, similar projects will be constructed in
other communities where there is limited land available for the construction of
single-family homes.