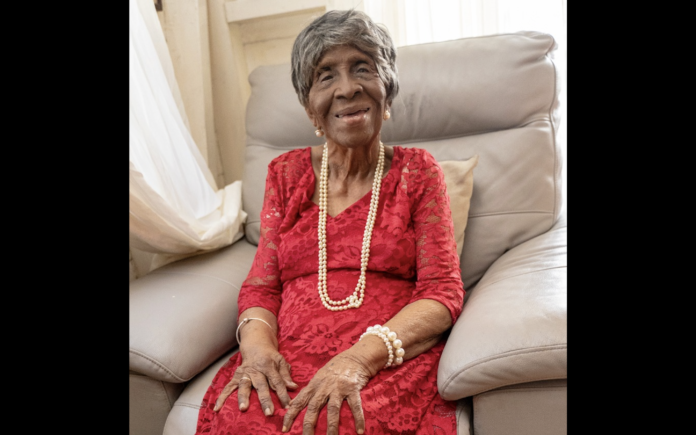 Mrs. Ethel Charles was born to parents Christopher and Mary Grant on May 24, 1919 in Willikies Village, Antigua.

In 1938, she married Mr. Lauchland Charles and subsequently relocated to Liberta Village, where she still resides today.

The marriage produced two daughters, Bernadeth and Joycelyn, who describe their mother as “one of the most generous people we know” – a sentiment echoed by many who know Mrs. Charles closely.

Affectionately known as Mother, Mother Charles, Comrade Charles, Sister Ethel, and Nennen, Mrs. Charles was the “Local Village Nurse/Doctor” in Liberta at one time, and she adopted and fostered many people in the community.

She had a passion for the arts and fervently believed that children should be provided the necessary tools and opportunities to develop their minds and talents. During the formative years of the Antigua Trades and Labour Union (ATLU), Comrade Charles established the Juvenile Division in Liberta. She mentored countless youths in the St. Paul’s Constituency, under the leadership of the late Ernest Williams, a member of Parliament for the Antigua Labour Party, led by the late Hon. V. C. Bird, Sr. With the assistance of other community leaders, Comrade Charles used that platform to educate the youths about the (ATLU) and how the Party fought the Colonial Masters who were sent to Antigua by the British Government to exercise authority over the people. She even staged concerts at the nearby Liberty Public School, showcasing the children’s skills in singing, acting, dancing and poetry.

As a staunch supporter of the ATLU, Mrs. Charles played a significant role in rallying her Comrades and uniting the people of St. Paul’s to “Bring home the seat” during elections. She also played a prominent role in the Development of her Union and Political Party, The Antigua Labour Party (ALP).

The women of the ALP were the mainstay of Labour. The group, known as “The Women’s Action Group,” functioned as Soldiers of the Movement, and were always on the front lines when the Party geared up for a general Election.

Comrade Charles’ extensive knowledge and skills within the Women’s Group facilitated the Movement’s leadership to establish her as a member of the Organizing Committee.  Her Constituency never lost an Election Seat until the year 2009.

Mrs. Charles is an extremely prayerful person, who reads her bible diligently, daily, and strongly believes in the power of prayer. She is also an optimist, and if you asked her what she attributes her longevity to, I am sure she would acknowledge her faith, spirituality ,positive – but realistic attitude, clean living, and a loving and supportive  family dynamic.  When asked about her favorite foods, Mother Charles lists Fungi at the top of the list.  She will tell anyone who listens that she never refuses Fungi or Sweet Potatoes, even if she has just finished a meal.  Other entrees on her favorite list are: Bull Foot, Pork, Dumplings and Fish.  For dessert, she likes Ice Cream and Black cake – all excellent choices!

Mother Charles has always been involved in the Anglican Church and, in 1940, she joined the St. Paul’s/St. Barnabas Mothers’ Union (MU) where she was a highly active and staunch member for more than 75 years. She instilled strong Christian values in her fellow MU Members and, as a devoted member of the group, sang in the church choir, served on the Altar Guild and Fundraising Committees, and. accompanied priests on home visits to parishioners. She is passionate about the Church’s activities and while she no longer attends Church Services and MU Meetings in person; she receives Holy Communion at home and visits from MU members, whom she still encourages spiritually.  Her motto is: “Keep the fire of the Mothers’ Union burning and alive because it is one of the few organizations that still exists in churches today.”

Mrs. Charles is an insightful Christian woman who never misses an opportunity to encourage others. In addition to her two daughters, she is blessed with 9 grandchildren, 12 great grandchildren, and 15 great, great grandchildren.  The entire family, friends, Church family, and adopted/fostered children are truly thankful to God for the exemplary life Mrs. Charles has led and the values she instilled in everyone she encountered in her life.  May the good Lord in heaven continue to richly bless her for as she celebrates her 101st Birthday.  Amen!