After being in place for less than a week, the 2017 decorations for Antigua & Barbuda’s 60th Anniversary of Carnival have all been taken down in St. John’s.

It is not certain who removed the decorations which were hanging from trees and utility poles up until yesterday.

The multicoloured flags were the subject of discussion of social media over the weekend, after Lesbian Gay Bi-sexual and Transgender activist Tasheka Lavann posted a witty comment about them on Facebook.

“Happy Gay Pride Antigua! Long overdue! I’ll be there next year,” Lavann who is a former carnival queen said.

The Canadian based woman said “Y’all can stop asking me now if Pride is being celebrated in Antigua. I’m coming home to plan it after Carnival.”

Her comments led to a firestorm of reaction and hours later the rainbow coloured decorations were all removed leaving the city street bare days before carnival.

After news reached Lavann that the decorations were removed she again took to Facebook to condemn the act.

“I want people to see what hatred to a community looks like,” Lavann said in a Facebook LIVE video. 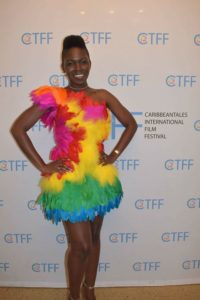 The former media worker said the act lacked common sense and vowed to use all her media contacts to bring attention to the event.

The rainbow flag, commonly known as the gay pride flag or LGBT pride flag, is a symbol of lesbian, gay, bisexual and transgender (LGBT) pride and LGBT social movements.

The flag is typically flown horizontally, with the red stripe on top, as it would be in a natural rainbow.