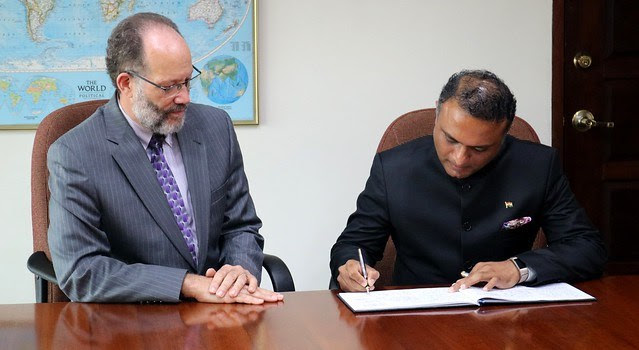 The Caribbean Community (CARICOM) and India have reaffirmed decades-old ties with the accreditation of a new envoy to CARICOM, His Excellency Dr. K. J Srinivasa.

In accepting his letters of credence on Thursday, last, CARICOM Secretary-General Ambassador Irwin LaRocque described India as “an important partner for the Caribbean Community.”

He thanked the South Asian country for its support, demonstrate most recently, in a US$ 1Million contribution towards recovery and reconstruction efforts in the Bahamas. India had also donated US$ 1Million to assist Antigua and Barbuda recover from the 2017 Hurricanes.

Secretary-General LaRocque said Hurricane Dorian is yet another example of the “crippling effects” of climate change in the Region. Recalling the first-hand look he and the CARICOM delegation got of the damage it left in parts of the Bahamas, he said:

“The death toll, the catastrophic damage to property and infrastructure, and the humanitarian trauma are chilling testimony to our vulnerability to the intensified climatic events caused by climate change.”

The Caribbean Community has relentlessly advocated that international financial institutions (IFIs) take on board the vulnerability of Small-island and low-lying coastal Developing States (SIDS), in their criteria for access to development financing. On Thursday, while accrediting new envoys of Finland and India to CARICOM, Secretary-General emphasized the need for IFIs to change the use of GDP per capita as the principal criterion.

He also underscored the inextricable link between building resilience to mitigate the effect of climate change and concessional financing, access to which many CARICOM Member States do not have.

“Graduation of many of our countries out of access due to the use of GDP per capita as the major criterion denies them the right to such financing,” the Secretary-General said, adding:
“Studies have shown that for every dollar spent in building resilience, seven are saved in reconstruction costs following a natural disaster.”

The support of friendly countries like India, he said, is needed to convince the international community that vulnerability must be a significant factor in determining assess to concessional development financing.

India’s support has been evident in other areas including its US$ 1Million contribution to the CARICOM Development Fund earlier this year and capacity building under the India Technical and Economic Cooperation (ITEC) programme. This programme includes the provision of information technology support to the CARICOM Secretariat’s offices in Guyana, Barbados and Jamaica. It also includes specialised training courses for young CARICOM diplomats, the second of which will took place in New Deli from 12-23 August.