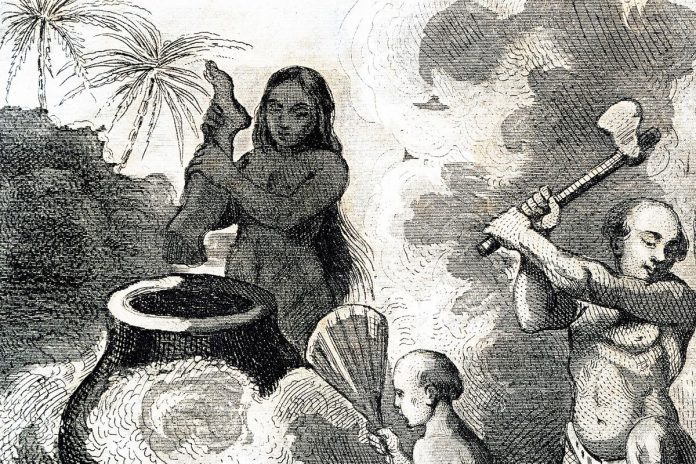 A new study carried out by a US-based university in the state of North Carolina says researchers have uncovered evidence that there was truth to reports of a population of cannibals in The Bahamas and Hispaniola, as described by Christopher Columbus.

According to North Carolina State University (NCSU) scholars had discounted Columbus’ reports of a population of cannibals that raided other peoples in those countries.

But now, the university says new evidence suggests that “Columbus was right, and that he encountered the warlike Carib people, which he called ‘Caniba,’ though it’s still not clear if they actually ate people”.

NSCU said the finding “upends the conventional picture of what Caribbean peoples looked like before the arrival of Europeans – and where those populations came from”.

A paper on the work, “Faces Divulge the Origins of Caribbean Prehistoric Inhabitants”, was published on January 10 in the journal Scientific Reports.

The leaders of the study were Ann Ross, a biological anthropologist and professor of biological sciences at NCSU, and William Keegan, curator of Caribbean archaeology at the Florida Museum of Natural History.

“The big idea is that anthropologists thought there were two waves of pre-Columbian migration into the Caribbean. One that came up from South America into the Lesser Antilles, like Grenada and Guadeloupe, and another that came from the Yucatán up through Cuba. What we’ve found indicates that there was a third wave, separate from the others,” Ross told NSCU. “The Carib people were the third wave.”

“Until now, it was thought that the Carib didn’t make it past Guadeloupe, but our work indicates they made it as far as The Bahamas,” she added.

Ross said one of the things that they brought to the table with this study was an analysis of the facial morphology of pre-Columbian remains found in The Bahamas and other islands in the region.

She said that the Carib practiced artificial cranial modification, meaning that they engaged in a practice called “skull flattening” to produce particular characteristics.

“That’s fairly easy to spot,” she said. “But to really track a population you need to focus on heritable characteristics – things that are passed on genetically.”

She said this technique is known as geometric morphometrics, stating that it “offers a scientifically robust way of determining kinship”.

“In other words, are these skulls from the same people, or from different groups?” she said.

The researchers also looked at craniofacial measurements of 95 pre-Columbian skulls from across the region: Venezuela, Cuba, Hispaniola, Jamaica, Colombia, Puerto Rico, the Yucatán, Florida and Panama.

“We found that there were effectively three clusters of craniofacial similarity across the Caribbean, suggesting relatively close kinship ties.”

Ross said one cluster, from the so-called first wave of migration, was in Cuba and the Yucatán.

She said the second cluster, from the Arawak expansion – or second wave – was in Venezuela, Colombia and Puerto Rico. “But, and this is the exciting part, we also found that there’s a third cluster – from a Carib wave – in The Bahamas, Hispaniola and Jamaica,” Ross said.

Scientific Reports notes that the origins of the first peoples to colonize the Caribbean islands “have been the subject of intense debate for over 30 years”.

It adds that competing hypotheses have identified five separate migrations from the mainland, with a separate debate concerning the colonization of The Bahamas.

Scientific Reports said that significant differences in the facial morphology of the pre-Columbian inhabitants of Hispaniola and Cuba led to the present study of Lucayan skulls from The Bahamas.

With the goal of determining which group the native Lucayans more closely resembled to resolve this long-standing dispute, Scientific Reports says the results indicate that they are related to groups from Hispaniola and Jamaica and not to Cuban inhabitants.

“This study clarified the larger picture of Caribbean migrations and supports evidence for a Carib invasion of the Greater Antilles around AD 800,” it says, adding that the defining image of the Columbian encounter is “ravenous cannibals descending upon unsuspecting peaceful Arawak villages, whence they ate the men and took the women as wives”.

The scientific journal notes that from the moment he landed on the first Bahamian island – Guanahaní – Columbus wrote, “I saw some who had marks of wounds on their bodies, and I made signs to them asking what they were, and they showed me how people from other islands nearby came there and tried to take them, and how they defended themselves; and I believed and believe that they come from Tierra Firme to take them captive.”

Scientific Reports says this is the first of 10 allusions to Carib raids during the first voyage – adding that archaeologists have questioned this assertion based on the possible confusion of Caribe and Caniba (the Asiatic subjects of the Grand Khan), content with the knowledge that the true Caribs never advanced further than Guadeloupe in the Lesser Antilles.