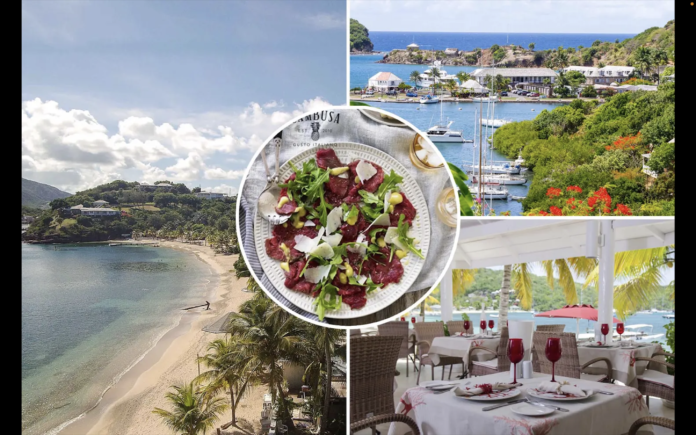 NYPOST: Italians have a big advantage over most countries when they arrive somewhere new — at least according to Angelo Caputo. “I always say we conquer them with spaghetti rather than weapons,” he tells The Post.

That’s what he did 40 years ago, when he first moored his sloop off the southern coast of Antigua and prepped an invasion by pasta — or to be more precise, by setting up the club-restaurant Abracadabra.

Four decades later, it’s still one of the country’s buzziest beach spots, and the anchor for an unlikely outpost of Little Italy in the Caribbean. If you fancy pizza as good as in Naples, just book a trip down to Antigua’s southern coast, in and around Falmouth and English Harbour.

Caputo wasn’t the only Italian incomer. A year after he first set foot here, Tuscan Carlo Falcone also docked his yacht on Antigua — he was actually detouring quickly enroute to Guadeloupe. He was already working as a dockmaster and so cottoned on quickly to Antigua’s potential for yachting at the time: charming, village-sized settlements ranged around a pair of deep-water harbors. So upped and moved here, scraping up enough money to buy the local marina — which he still owns.

Now a wealthy local businessman and his country’s honorary vice-consul, Falcone says he, Caputo and co consider it a homecoming. “Antigua was named by an Italian, Cristoforo Colombo,” he says, now a wealthy, “Yes, the English came with Nelson. But we were there before them.”

And in the almost four decades since these two Italian entrepreneurs settled on Antigua, they’ve lured more and more of their countrymen to join them. Giorgio Armani and Stefano Gabbana both own houses nearby, as does Silvio Berlusconi; he regularly moored the superyacht he bought from Rupert Murdoch, the Morning Glory, here, too.

Indeed, it was Berlusconi’s close friendship with Lester Bird, the charismatic former prime minister of Antigua, which helped encourage both investment and tourism from Italy in the last decade and accelerated the stealth Italian takeover.

Caputo says Antigua’s resemblance to some of Italy’s rocky outposts helped it seem homey, notably the ultra-chic Pantelleria island, between Sicily and north Africa (Armani has a home there, too) “Look at the rocks, crumbling and yellow, it’s the same sort of tufo, and the ocean looks very alike in a certain way. It’s very Mediterranean,” says Angelo Caput, adding that its scarcity of fresh water is a parallel, too. 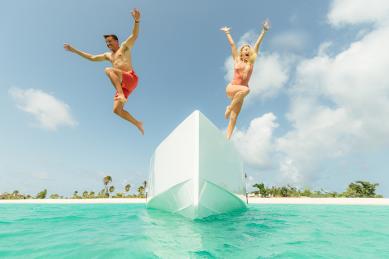 He laughs that they’ve coalesced around a town named English Harbour. “We did it there to piss off the English,” he jokes, recalling an exhibition by the artist Bruce Smith. “He did a view of the place covered in spaghetti. That was the first thing that showed us taking over.”

Roberto Falangola’s family were pioneers, too: he grew up locally, as his father was Angelo’s first partner in Abracadabra. “This area was discovered by this small group of Italians who essentially spread the news there was this little paradise in the Caribbean by word of mouth,” he tells The Post, “We’re all cousins, or friends, or friends of cousins. Once one friend is there, everyone follows.”

Come to this corner of the Caribbean, he says, not simply for a recreation of Italy, but a fusion of both countries. “We’ve blended Italian culture with what’s available here.” If you want a taste of this unlikely Antiguan-Italian hotspot, here’s where to stay, eat and play.

The Inn at English Harbour

Roberto’s mother, Susanna, and stepfather, Enzo, own this plush hotel on a 19-acre plot, originally built by a British pilot Peter Deeth in the 1960s. They overhauled it into its current, ultra-luxe vibe after buying it twenty years ago after mooring in front of it. “They went ashore to have some breakfast, and ended up falling in love with the resort,” Roberto says, “So my stepfather made an offer to buy it outright as a present for my mom.” The pristine, private white sand beach is set up like a Mediterranean bagno, with umbrellas and full facilities; rooms are lush but simple, Colonial-style wooden furniture offset by whitewashed walls and crisp white linens (doubles from $591).

Carlo Falcone still owns and runs this marina-hotel right on the waterfront in Falmouth Harbour, which 19-room hotel plus 30 studio-style residences; best are undoubtedly the maisonette-style split-level suites with double balconies, the lower overlooking the lush gardens and the upper out across the water. It also has full facilities for yachts refueling and revictualing, including a supermarket and liquor store, plus an onsite gourmet restaurant; boats drawing up to 25 feet can moor here (doubles from $209).

Sardinia-born Mauro first started out offering an ad hoc taste of home to the expat Italians in the mid-1980s during sailing week, earning his nickname in the process. “He was giving out free pizza from a shack in English Harbour, that slowly morphed into this place,” recalls Falangola. He and his wife built a wood-fired oven at this site, where they relocated in 1992. Many of the ingredients he uses, like cherry tomatoes, are homegrown.

Hop a quick taxi ride from the hub of the harbor to this open-air wine bar slash restaurant run by chef Alessandro Moncada. Try a hearty Livorno-style cacciucco fish soup, one of the homemade pastas or lobster, fresh caught in nearby waters and plucked from the tank to be cooked to order.

Milan native Rosella and her son Andrea run this upscale restaurant on a wooden dock in Antigua Slipway — look for the fluttering Italian flag for confirmation you’re in the right place. Come here to chill out with a glass of wine on one of its comfy sofas perched right on the water, or gorge on a greatest hits of Italian food, whether fritto misto-style calamari or spaghetti carbonara, studded with crunchy chunks of guanciale.

This restaurant, which sits right on the water, is busiest at lunchtimes, when the crowds chow down on classic Italian comfort foods like grilled mozzarella di bufala grilled and wrapped in parma ham or chunky meatballs slathered in rich tomato sauce — all cooked up by the Sicilian Taibi family. Order one of the wood-fired pizzas to go, and they’ll happily deliver it by boat to any vessel moored nearby.

Owner Arianna was born inItaly but was one of the first generation of kids to grow up in English Harbour. She now runs this supply store which is beloved by superyacht chefs for its reliable supply of super-fresh fish and local produce (think micro greens and other gourmet treats). Stop by, too, to pick up some souvenirs: she’s pulled together a chic assortment of trinkets and other keepsakes, all of them made on-island.

What do you think? Be the first to comment.

The hub of the expat social scene here — call it Abra’s, just as the Italians do — is about to reopen in November, after a two-year gut reno by Angelo and his current co-owner, brother Paolo. It runs as an upscale restaurant during the early evening. “This is a real Italian restaurant, where the recipes are based on my mother’s,” says Caputo, ever the proud son. But linger after dinner to watch it transform into a classic Med-style seaside disco, complete with live DJ and dancing on the tables. Don’t be surprised to see Armani on the dance floor at Christmas, either as it’s one of his favorite spots.