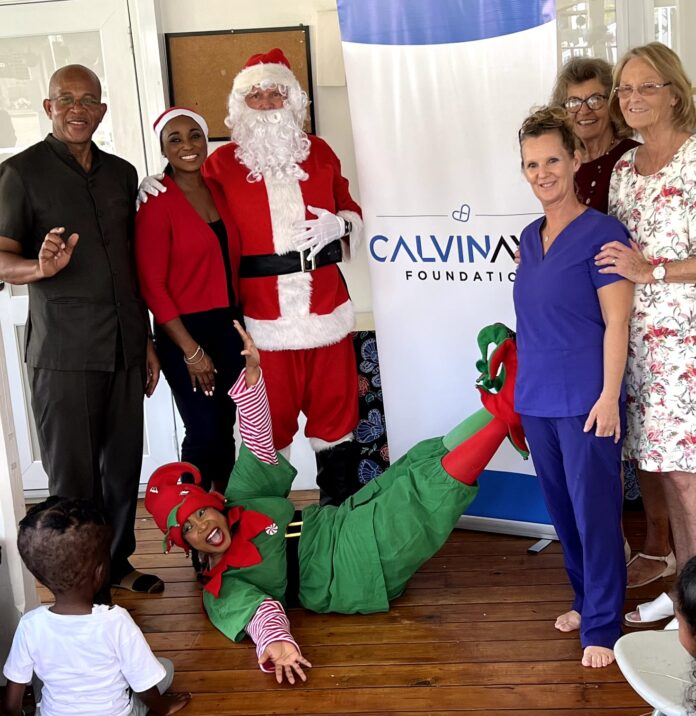 St. John’s, Antigua: Monday, December 19, 2022: On any other day, CalvinAir Helicopters Chief Pilot, Steve Gray, would be wearing his uniform and preparing for takeoff.

But on Thursday, December 15, he was dressed in his bright red Santa costume – complete with his sack of gifts – and rehearsing his Ho, Ho, Ho’s in front the mirror.

His mission? To bring Christmas cheer and gifts to the children and residents of both the Friends Foundation and the Care Project, all of whom he says were on his “good” list.

One of Steve’s most recent missions, in relation to the Friends Foundation, was when he took to the skies in an attempt to locate missing autistic teen, Shamar Harrigan.

Last Thursday, he gladly agreed to continue his act of goodwill, by volunteering his time to spread Christmas cheer to the Friends Foundation, where Shamar had been attending for several months as a part of the outreach program.

Santa Steve arrived to the sound of cheers from the staff and children of the Friends
Foundation/Developmental Center and was treated to a Nativity play, produced by the staff.

“It was fantastic,” Steve said. “I was such a great opportunity and so heart-warming.”
Friends Foundation Principal, Mr. Raphael Robertson, who spoke on behalf of the organization, expressed heartfelt thanks to the Calvin Ayre Foundation, for once again supporting the charity and for bringing Christmas cheer into the children’s lives.

Santa’s next stop was the Care Project, which is only a few minutes away from the Friends
Foundation on the old Holberton Hospital compound, where he was greeted with excitement, high-fives, and smiles.

The government-managed facility provides a home and basic care for children with severe mental and physical disabilities.

Acting Matron at the Care Project, Shellon Jones, was elated to receive the gifts on behalf of the residents and thanked the Calvin Ayre Foundation for its continued support.

Jamilla Kirwan, Media Relations Specialist for Ayre Group and Manager of the Calvin Ayre
Foundation spoke on behalf of Ambassador Calvin Ayre and his Foundation.

“As always, it gives us great pleasure at CAF to contribute positively to the quality of life of the most vulnerable in our society,” she said.

“The joy on the children’s faces is priceless! We will continue to play our role and make a difference in our society in the areas of Emergency Response, Social Development, Education and Sports.

Next time, we hope Santa will be able to arrive in his helicopter!” Kirwan ended by adding that the prayers of the entire Ayre Group are with Shamar’s family and friends.