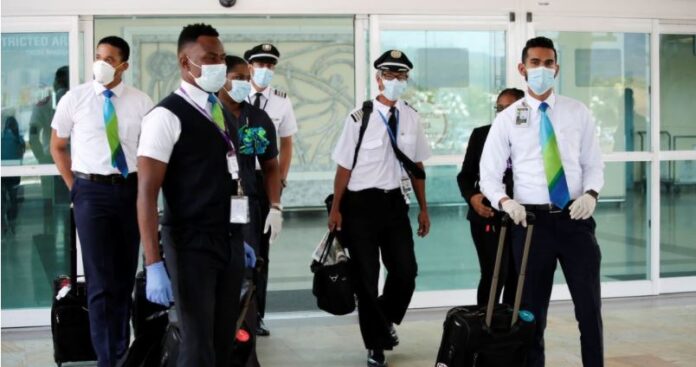 Trinidad and Tobago Airline Pilots Association (TTALPA) and Caribbean Airlines have agreed that all pilots’ salaries will be cut by 57 per cent — just over half — for the next three months, to support CAL’s cost cutting measures amid the COVID-19 pandemic.

The pay cut will halve the salaries of all CAL’s pilots until January 2021.

It will also affect other aspects of their pay up to June 2021, but they will keep their jobs.
TTTALPA had been negotiating with CAL in recent weeks on the issue.

“It’s a bittersweet situation,” said TTALPA’s industrial relations consultant Gerard Pinard. “It meant between a rock and hard place, but we’re making the sacrifices and reached an agreement.”

CAL communications manager Dionne Ligoure said discussions, which had been ongoing were expected to be concluded shortly.

Pilots were among the employees which CAL planned to send home temporarily due to effects from the pandemic, which closed T&T’s borders. Up to June, the grounded airline lost $96 million.

Last month CAL announced it would send home about one-third of staff — 600 — for three months and institute pay cuts for others earning $7,500 over eight months starting last Thursday. CAL was expected to start issuing letters on Monday to pilots.

Pinard said after CAL rejected an initial TTALPA proposal, TTALPA suggested a salary cut and CAL called the 57 per cent figure and other conditions. He detailed the situation.

Apart from wanting to ensure CAL and T&T keep steady, pilots then voted among themselves to accept the three months 57 per cent pay cut for some of their fellow pilots —who would have been sent home temporarily without pay — to continue working.

Pinard said pilots accepted the pay cut despite operating with salary rates negotiated in 2014. Negotiations are outstanding for collective agreements for 2015-2018 and 2018-2021.

Under the agreement for fleet managers captains, pilots:

With the agreement, the recall of pilots to flying will be according firstly to operational requirements and secondly, the seniority list.

CAL’s financial situation will be reviewed monthly. In event of improved circumstances during the time, parties will review terms of the agreement.

Pinard said CAL had in good faith been paying pilots since the lockdown, “So pilots felt they also had to act in good faith. Though I don’t know who would have accepted this sort of salary cut, especially in this sector.

“But everybody’s prepared to make sacrifices for pay cuts hoping things improve for CAL and T&T. CAL said they have no more Government financing and had to find ways to keep going to achieve target savings.”

Pinard added, “TTALPA should be commended for its responsible sacrifice to ensure CAL remains a viable concern and trusts that these sacrifices will not go unnoticed when bargaining recommences for the outstanding collective agreements.”

TTALPA’s pay cut acceptance is the latest action among sectors trying to deal with increased costs due to the COVID pandemic. Many areas have attempted to retool since the pandemic hit. Last week Prime Minister Keith Rowley announced a proposal to cap the tax exemptions on government vehicles.

Some pilots said it was fair if they were co-operating to give CAL savings and accepting pay cuts, no pilots should be sent home. “Pilots have vested interests in CAL.”

While CAL has been grounded, small chartered aircraft have been busy transporting those who have obtained exemptions.

HOW IT WAS ACHIEVED: