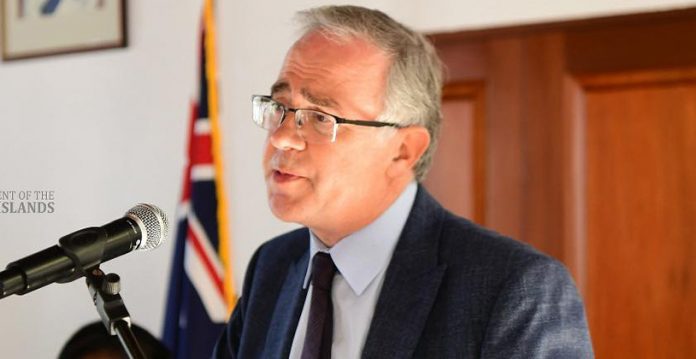 Following the arrest of Andrew Fahie, Premier of the British Virgin Islands, Oleanvine Maynard, Managing Director of BVI’s Port Authority and her son Kadeem Maynard the Governor-General John Rankin, announced that there would be a two-year suspension of the constitution of the territory. CLICK HERE TO JOIN OUR WHATSAPP GROUP

Rankin said, “unless the most urgent and drastic steps are taken, the current situation with elected officials deliberately ignoring the tenets of good governance will go on indefinitely.”

He notes that the people of the BVI deserve better and that the UK Government also have an obligation to protect them from such abuses and assist them to achieve their aspirations for self-government as a modern democratic state.

He states that the continuation of the current situation will adversely affect those aspirations and that the only way in which the relevant issues can be addressed is for there to be a temporary partial suspension of the Constitution. He accordingly recommends [the] dissolution of the House of Assembly and cessation of ministerial government for an initial period of two years. During that period, he recommends a Governor-led administration with such assistance as the Governor considers appropriate,” explained the Governor-General.

In a statement by the Acting Premier of the British Virgin Islands, Dr Natalio D Wheatley, responding to the Publication of Commission of Inquiry (COI) Report, said what the suspension means for his territory. CLICK HERE TO JOIN OUR WHATSAPP GROUP

“What this would mean in real terms is that there will be no more elected representatives who represent the people of the districts of the territory in the House of Assembly, where laws are made for our society. There also would be no Government Ministers to advance the public’s priorities or Cabinet to approve policy. All of this authority would be vested in the Governor.”

In reacting to the news of the suspension, the Acting Premier outlined briefly why a local parliament is necessary.

“The benefits of representative democracy to the public is the understanding and responsiveness of their elected representatives to their challengers, who also served as conduits of their views, especially on reforms. I have written to Governor Rankin and also shared with the UK Minister for the Overseas Territories my initial thoughts on the recommendations as a whole from the standpoint of good governance and democracy.”

Like much of the region, the Governor-General said he was in shock at the news of Fahie’s arrest.

“I, like many of you, have been shocked by the arrest of Premier Fahie, with whom I have worked as Governor over the past 16 months. I know that this community is a small but proud one, and I know you care deeply about the reputation of this great territory. The rule of law, transparency, accountability and good governance are and must be the foundations of a territory’s reputation.”

Rankin stressed that the arrest of the Premier is in no way related to the COI report and is not linked to the BVI’s financial services sector.

The 900 page COI report has 45 recommendations for the territory, and decisions on them will be made in the coming days.

“The granting of residence and the belongership is devolved in the BVI government. The commissioner concluded that the Government’s application of a 20 year continuing ordinary residency threshold for Belonger status contrary to the ten years stipulated in BVI law was and is unlawful. He also found that in 2011, at least 224 individuals were granted Belonger status outside the framework of the law. Rather, they were simply added at Cabinet level on personal recommendations by members of the Cabinet without any due diligence or process, and the commissioner addresses more recent cases in which Cabinet has appeared willing to act in an illegally arbitrary manner in relation to residence and Belongership lines.” CLICK HERE TO JOIN OUR WHATSAPP GROUP

The commissioner of the COI report looked into several other government contracts; a $1 million School Wall Project split between 70 contractors, 40 of whom had no constructors license; the collapsed BVI Airways $7.2 million; a $1 million Harbour Development project Seacoast Bay left abandoned; A series of contracts amount to under $1 million, awarded to a former special advisor to Premier Fahie with some of the contracts being false and more as outline by the Governor-General.

“The commissioner concludes that with limited exceptions, governance in areas under the control of Government Ministers is at best very poor, with principles such as openness and transparency not simply absent, but positively shunned. Proper procedures, checks and balances are absent or patently inadequate or ignored or bypassed. He states that the evidence in this regard is overwhelming and extends to almost all areas of Government. He notes the recent good governance measures such as the Whistleblower Act and the Integrity of Public Life Act, neither of which are yet enforced, have to a large extent been reactive to the work of the Commission of Inquiry and states that “In my very firm view the people of the BVI can have no confidence as things currently stand, that these recent measures will be pursued and implemented effectively.”

Rankin shared that the commissioner found that good governance attempts made by the BVI government were reactionary to the Commission of Inquiry.

“The Commissioner recommends the return to Ministerial Government and Elected House of Assembly as soon as practicable with the Governor taking regular advice from the Advisory Council and others on the earliest practicable date on which such Government can resume. Secondly, the Commissioner recommends an earning and speedy review of the Constitution with the purpose of ensuring that abuses of the type he’s identified do not recur, establishing a Constitution that will enable the people of the BVI to meet their aspirations, including those in respect self-government within the context of [modern] democracy. Thirdly, he recommends a curtailment of the open-ended discretionary powers held by public officials, including Cabinet and fourthly, he recommends a series of audits and investigations which may give rise in due course, to further steps including in relation to criminal investigations.”

In response, the opposition leader in the BVI, Marlon Penn addressed the arrest of Premier Fahie, saying, “We are all shocked, saddened, and even embarrassed; however, it is important that we look beyond recent events and towards healing and unity.

I accept and acknowledge the gravity of this issue, as well as the other challenges and new headwinds that we now face. I strongly condemn any violation of the confidence and responsibilities entrusted to public officials.” CLICK HERE TO JOIN OUR WHATSAPP GROUP