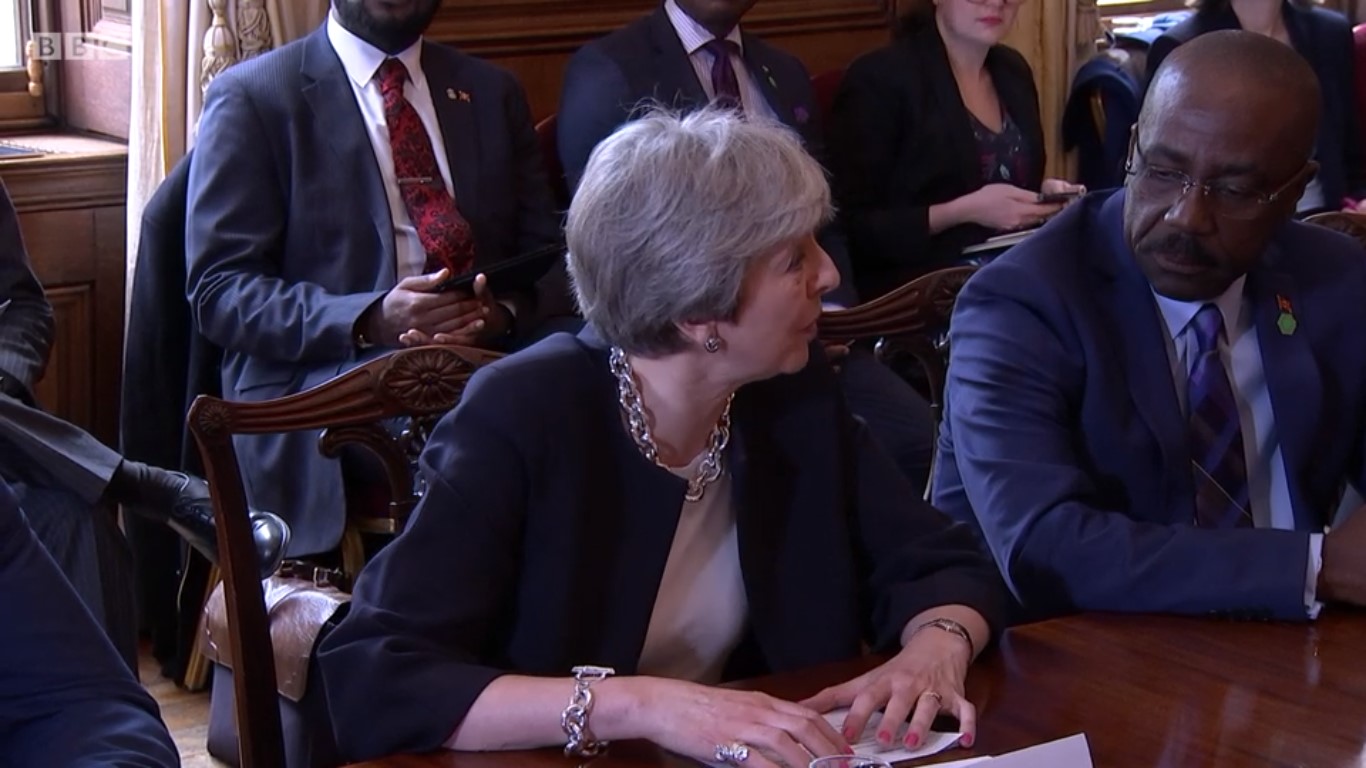 Prime Minister Theresa May has apologised to Caribbean leaders over the Windrush generation controversy, at a Downing Street meeting.

She said she was “genuinely sorry” about the anxiety caused by the Home Office threatening the children of Commonwealth citizens with deportation.

The UK government “valued” the contribution they had made, she said, and they had a right to stay in the UK.

It comes amid reports some are still facing deportation.

The PM said she wanted to “dispel any impression that my government is in some sense clamping down on Commonwealth citizens, particularly those from the Caribbean who have built a life here”.

She said the current controversy had arisen because of new rules, introduced by her as home secretary, designed to make sure only those with the right to remain in the UK could access the welfare system and the NHS.

“This has resulted in some people, through no fault of their own, now needing to be able to evidence their immigration status,” she told the foreign ministers and leaders of 12 Commonwealth nations in Downing Street.

“And the overwhelming majority of the Windrush generation do have the documents that they need, but we are working hard to help those who do not.”

The PM added: “Those who arrived from the Caribbean before 1973 and lived here permanently without significant periods of time away in the last 30 years have the right to remain in the UK.

“As do the vast majority of long-term residents who arrived later, and I don’t want anybody to be in any doubt about their right to remain here in the United Kingdom.”

The UK government has apologised after it emerged that some people who arrived from the Commonwealth decades ago as children were now being incorrectly identified as illegal immigrants.

The home secretary has announced a new taskforce and helpline to help those affected – and Mrs May promised cases would be resolved within two weeks of documentation being produced.

She said people involved in the process of establishing their status should not be “left out of pocket” as a result and would not have to pay for documentation.

Cases have emerged – such as these in the Guardian – of people who have lost their jobs, rights to health and benefits and faced deportation despite being able to show they have paid tax and National Insurance for decades.

Cabinet Office Minister David Lidington earlier said the government knew of no cases where British residents of the “Windrush generation” from the Caribbean had been deported because of their lack of documentation.

But Labour MP David Lammy has highlighted the case of a Windrush generation woman whose son was due to be deported on Wednesday.

The Tottenham MP said the mother of 35-year-old Mozi Haynes got in touch saying her son was due to be removed from the country after two failed applications to stay.

She said: “I feel betrayed and a second class citizen in my own country. This makes me so sad and the Home Office must show some compassion.

“I am unwell and almost 75, I live on my own and I need my son to stay here. I need my family around me and I can’t face being alone. He has applied to the Home Office and been refused twice.”

Mr Lammy said: “This is a national disgrace. What is going on in the Home Office makes me ashamed of our great country.

“The prime minister must act urgently to halt this deportation and all other Windrush deportations. Heads must roll over this and the home secretary and immigration minister must consider their positions.”

Speaking after the meeting with Theresa May, Jamaica’s prime minister Andrew Holness said he had accepted her apology, adding: “I believe that the right thing is being done at this time.”

He said he did not know how many people had been affected by the controversy, but it was “at least” in the hundreds.

Asked if Mrs May was to blame for the situation, he said: “I can’t answer that question. The truth is that she has said there has been a policy change, that this was an unintended consequence.

“As Caribbean leaders we have to accept that in good faith.”

He added that Mrs May had not been able to say “definitively” that nobody had been deported as a result of issues with paperwork.

Timothy Harris, prime minister of St Kitts and Nevis, said: “We see this basically as the start of the dialogue, as evidence is uncovered which requires correction.”

He said he hoped the British government would “make good any injustice” suffered by individuals, including by offering compensation.

Thousands of people arrived in the UK as children in the first wave of Commonwealth immigration 70 years ago, often on their parents’ passports.

They are known as the Windrush generation – a reference to the ship, the Empire Windrush, that brought workers from the West Indies to Britain in 1948.

Under the 1971 Immigration Act, all Commonwealth citizens already living in the UK were given indefinite leave to remain.

However, the Home Office did not keep a record of those granted leave to remain or issue any paperwork confirming it, meaning it is difficult for the individuals to now prove they are in the UK legally.

Changes to immigration law in 2012, which requires people to have documentation to work, rent a property or access benefits, including healthcare, has highlighted the issue and left people fearful about their status.