The family of a man whose life was saved by a fundraising campaign say he is “struggling”, six months after he was shot in the head.

Christopher Tester, 37, from Torquay, was shot during a robbery at his parents’ restaurant in Antigua.

He was wounded on Christmas Day while trying to “shield his mother”, and campaigners raised more than £103,000 to fly him to Devon for treatment.

Mr. Tester needed an operation on his skull and is now blind. 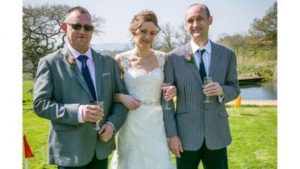 After the shooting Mr Tester was in an induced coma at Mount St John Hospital on the Caribbean island before being brought to Derriford Hospital in Plymouth.

He returned home on his birthday at the end of February, and his parents Tony and Gill said additional money was raised to adapt his home to make it comfortable.

He is now said to be enjoying guitar lessons, playing the ukulele, walking, swimming and spinning, despite “struggling to come to terms with his blindness”, according to his parents.

In an update on his appeal website, his parents said it had been a “very trying time” for him since his return to the UK in January and he was in “a lot of pain” after surgery.

After being transferred to a rehabilitation hospital in Plymouth, a CT scan revealed Mr Tester had an “air leak” in his skull, requiring a seven-hour operation to avoid a brain infection, they said.

Mr and Mrs Tester said they were “truly grateful” to the 1,728 fundraisers who made their son’s journey home possible.