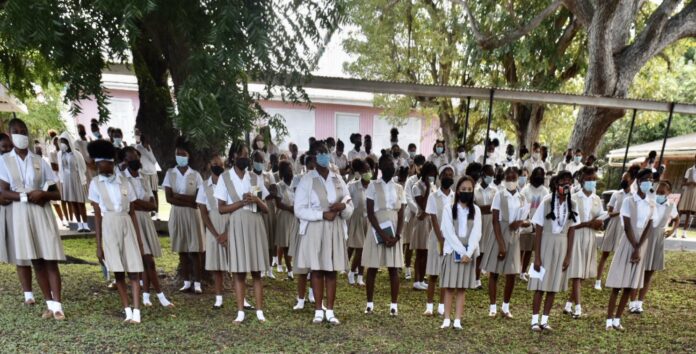 The British High Commission St John’s is preparing to celebrate Commonwealth Day and the Queen’s Jubilee in partnership with the Ministry of Education and ABS by engaging secondary school students on both islands in a competition themed “Antigua and Barbuda benefits from being a member of the Commonwealth”.

Secondary students are invited to perform in any one of three categories: spoken word (2-3 minutes), song (not exceeding 3 minutes), or drama (not exceeding 5 minutes) and email their submissions to [email protected] by 25 February 2022.

Winners will receive individual prizes, be hosted at a reception along with the teachers who assisted them, and also secure a donation to their schools.

Resident British Commissioner, Lindsy Thompson, commenced school tours today at the Christ the King High School to promote this competition. In her encouragement for widescale participation she noted the importance of awareness and understanding of the opportunities that are available to young people because of the partnerships and shared values that our countries have by being members of multilateral bodies like the Commonwealth.

She said, “Antigua and Barbuda is one of the 54 countries in the Commonwealth of Nations – comprising over 2.5 billion people – 60% of whom are under 30. There is a wealth of student talent here in Antigua and Barbuda and I’m really looking forward to seeing the students’ entries, which will combine with their research on the benefits of Commonwealth membership with their creative and dramatic flair.”

The three winning pieces will be professionally recorded and released to the nation via ABS and other national media platforms on 14 March 2022, which is Commonwealth Day.