The country’s latest murder victim competed at Party Monarch quarter-finals hours before he was stabbed to death at his mother’s establishment.

Jalon Thompson sang Shit Pit at the Barrymore Hotel and according to a member of his entourage between midnight and 1 a.m. he left for his mother’s club on Lower Nevis Street.

According to reports, while there the 27-year-old Paradise View resident encountered his long-time foe, 28-year-old Prince Charming Graham of Grays Farm.

Lawmen say the two “apparently had an ongoing feud over some previous incident, which took place at the popular “Jam Dung Night Club.” 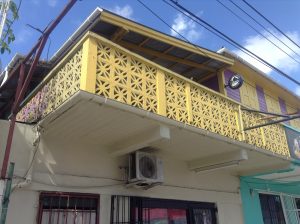 It is alleged that around 3:35 am on Thursday, they both got into a fight and Graham armed himself with a sharp object, which he used to inflict a stab wound to the deceased chest.

He was transported to Mount St. Johns Medical Center, where he was pronounced dead approximately an hour later by a medical doctor.

Graham, who was also treated at the hospital for injuries he received in the incident, was discharged from the hospital and is now in police custody assisting the police further with their investigations.

The expressions and outpouring of grief and condolences were immediate on social media.

A close friend of Thompson told Antigua News Room that he loved music and would spend hours in the studio recording.

The friend who did not want to be named for privacy reasons said, the deceased was “always laughing, joking around and enthusiastic about life.”

The man said he last saw his friend on Tuesday and was invited to listen to his latest song Moco Jumbie.

Another friend described Thompson as “hyper” and said while he had a “street” side, he is someone who had the ability to reason with others.

His mother, businesswoman Cheryl Thompson could not be reached for comment at the time of this publication.