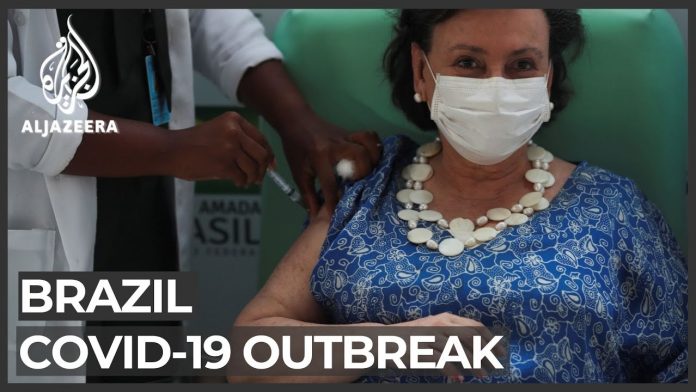 Brazil’s ‘super-covid’ variant has arrived in the US with a first case in a Minnesota resident who recently returned from the hard-hit South American country.

The variant – known as P1 – is likely around 50 percent more infectious.

It comes after President Biden reinstated travel bans blocking people travelers from entering the US from several countries with dangerous variants, including the UK and Brazil and added South Africa to the list.

But it was far too late. The Twin Cities resident tested positive for COVID019 on January 9 and was already ill by then

Brazil’s variant is particularly worrisome because its mutations may render vaccines less effective.

It is the first case of the P1 variant and the second imported variant to be imported to the US.

Just hours earlier on Monday, Dr Scott Gottlieb, a former FDA commissioner and board member of Pfizer said he believed the Brazilian variant was already in the US.

The person who was diagnosed with the new variant is a resident of the US and became ill the first week of January.

When they developed symptoms the person got tested for COVID-19.

Upon getting a positive result, they told the Minnesota health department that they had recently been to Brazil.

The sample was one of 50 random samples that University of Minnesota and state other state labs collected for genetic sequencing – the process that allowed them to tell that it was the new variant.