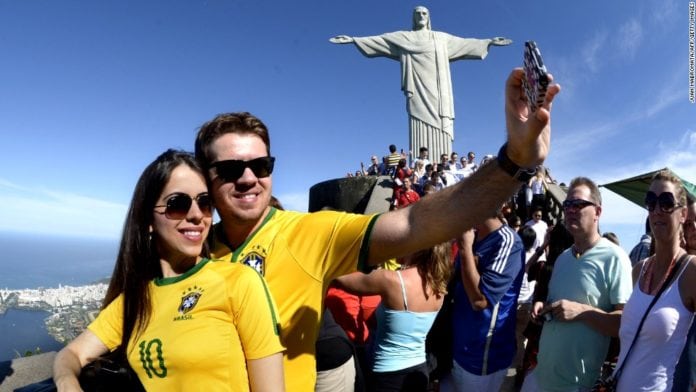 Despite the record figures, the government issued a decree reopening the country to foreign visitors arriving by plane, ending a four-month travel ban in hopes of reviving a lockdown-devastated tourism industry.

Brazil, which has been hit harder than any country except the United States in the pandemic.  Technical issues likely contributed to the high daily figures.

The health ministry had said Tuesday that problems with its online reporting system had delayed figures from Sao Paulo, Brazil’s most populous state, and the one with the most cases and deaths.

But in recent weeks the numbers of cases and deaths in the country of 212 million people have been stubbornly high even on normal days.

A health ministry official put that down to increased testing.

The government meanwhile extended coronavirus-related bans on foreign travelers arriving by land or sea for another 30 days, but said the restrictions “will no longer bar the entry of foreigners arriving by air.”

Brazil closed its air borders to non-residents on March 30, at a time when the virus was ravaging Europe and Asia and just taking hold in South America.

Now, Brazil is the hotspot, with no signs its infection curve is close to tapering off.

The tourism industry has already lost nearly 122 billion reals ($23.6 billion) because of the pandemic, the National Confederation of Trade in Goods, Services, and Tourism (CNC) estimates.

As a whole, Latin America’s biggest economy is facing a record contraction of 9.1 percent this year, according to the International Monetary Fund.

It remains to be seen how many foreigners will want to come.

President Jair Bolsonaro’s government has struggled to bring the outbreak under control and faces criticism for its handling of the crisis.

The far-right leader has dismissed the virus as a “little flu” and attacked lockdown measures by state and local authorities to contain it, arguing the economic fallout could be worse than the disease.

Even after contracting the virus himself earlier this month, forcing him to work from quarantine at the presidential palace for more than two weeks, Bolsonaro has continued to downplay the severity of the pandemic.

Rather than lockdowns, Bolsonaro is pushing the anti-malaria drug hydroxychloroquine as the way to fight the virus.

Like US President Donald Trump, whom he admires, Bolsonaro touts the drug as a remedy for the virus, despite a slate of scientific studies finding it has no effect against COVID-19 and can cause serious side effects.

After testing positive for the virus, the Brazilian leader took hydroxychloroquine himself, regularly showing off his box of pills.

Bolsonaro is currently on his third health minister of the pandemic, an active-duty army general with no prior medical experience.

The interim minister’s two predecessors, both doctors, left after clashing with Bolsonaro, including over his insistence the health ministry recommends hydroxychloroquine against COVID-19.

Meanwhile, most states have begun relaxing their stay-at-home measures, encouraged by the fact the number of infections finally appears to have reached a plateau.

But Brazil’s infection curve has flattened at a very high level of daily cases, and experts warn it is still too soon to exit lockdowns in many places.

If you wish to receive new articles related to Brazil, a deadly example in the world for tourism and COVID-19 enter your email address in the field below and subscribe: