Bikini Fitness champion Kimberly Ephraim has, for the second year in a row, claimed the title of Sportswoman of the year at the Antigua and Barbuda Vitamalt National Sports Awards last evening at La Casa Palmidita in Fitches Creek.

“I can’t string a sentence together right now. I’m so happy,” said Ephraim of her win.

“For me, it means that bodybuilding is climbing back up the ladder.”

After winning at national championships, Ephraim went on to become the first Antiguan to win the Bikini Tall Class at the Darcy Beckles Invitational in Barbados last year.

Since the inception of the National Sports Awards back in 1992, bodybuilding had claimed the title two times prior to Ephraim’s win last year. This year’s award thrusts the Antigua and Barbuda Bodybuilding Federation into second overall with four wins (Athletics, 12).

The runner-up for the award was Shawnisha Hector (Cricket).

National track star Cejhae Greene claimed the senior sportsman of the year. Antigua and Barbuda’s fastest man placed first at the Trinidad and Tobago national championships last year in the 100m in a time of 10.08s. He also placed 1st in two meetings in Belgium in July winning both the 100m and 200m in 10.20s and a personal best time of 20.59s in the 200m.

Accepting the award on behalf of his son who is on his way to San Palo, Brazil, Dr. Colin Greene said that, “He takes these [awards] seriously.”

“He’s always been a good model, especially for the youngsters in track and field and especially at Princess Margaret School. So, I think he’s going to be delighted.”

Noah Mascoll-Gomes (Swimming) was the runner-up for the senior award.

In 2017 Tamesha became the country’s first national Foil champion. She also went on to represent the country at the World Championships in Germany in July of last year. She placed 89th in the tournament and secured a world ranking of 376.

On the male side, world number one Tiger Tyson undisputedly claimed the Junior Sportsman of the Year award after a brilliant 2017 season. Runner-up for the award was Sheldon Noble (Athletics).

Tiger placed first in the U-19 Open World Championships in September, 2017 in Pingtan, China making him world champion and world number 1.

Other awardees on the evening were: 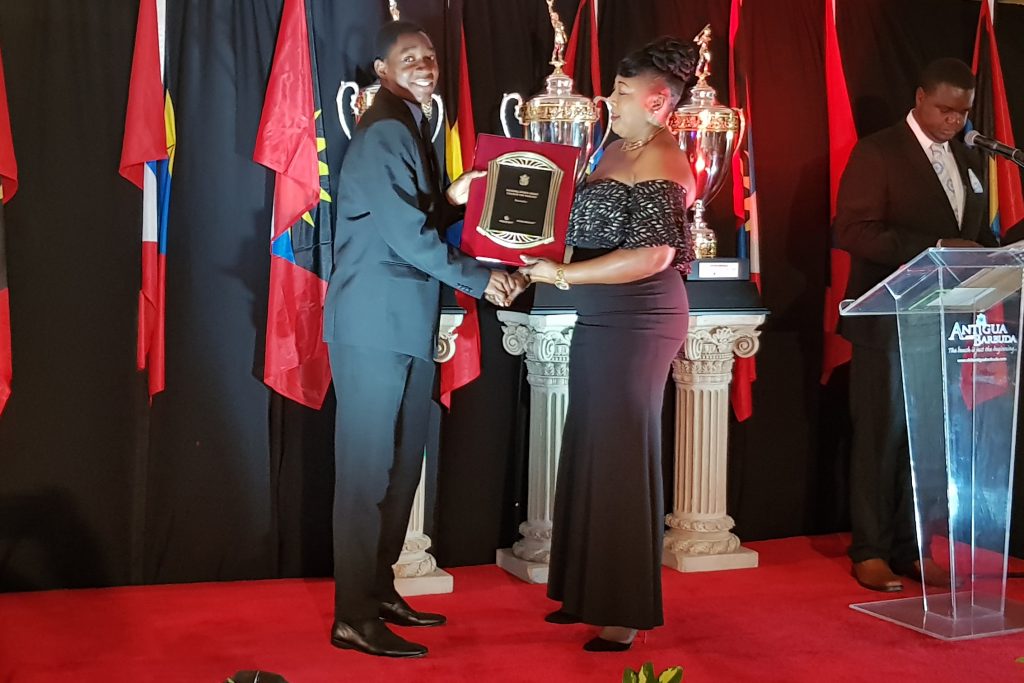 Minister of Sports Daryll Matthew commended all of the awardees last evening.

“We possess that determination. We possess that self-belief that, despite our small size [as a nation], that we will one day conquer the world,” said Matthew.

The minister went on to pledge the government’s unwavering support in the development of the nation’s athletes: “I give my very firm commitment, that as long as I am here in this position, and this government remains in office… I will do my utmost best to deliver to the athletes, and the administrators and others… everything they require to raise the level of sports in this country.”