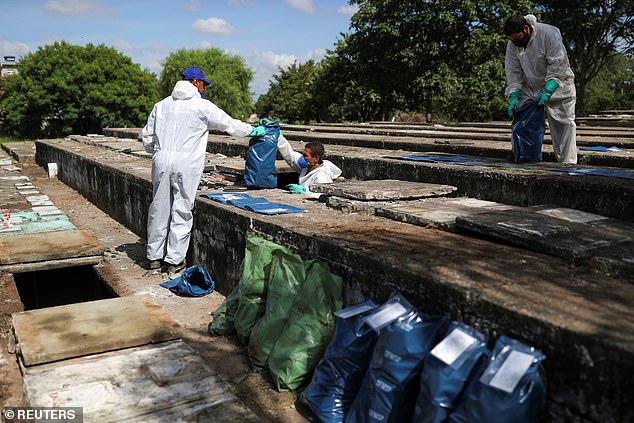 The biggest city in Brazil has ramped up efforts to empty out graves at one of its main cemeteries to make space for COVID-19 victims as deaths continue to soar at a staggering rate.

The decision to clear out 1,056 bodies from the old tombs came after the southeastern state of São Paulo registered record daily burials last week.

Gravediggers were spotted Thursday at Vila New Cachoeirinha cemetery in São Paulo’s northern reaches working in white hazmat suits as they opened the tombs of people buried years ago.

Relocating remains is standard in cemetery operations, said the municipal secretary responsible for funeral services, in a statement. But it has taken on renewed urgency as Brazil suffers its worse coronavirus wave since the pandemic began over a year ago.

On Monday, Brazil’s health ministry registered its highest daily COVID-19 death toll for São Paulo with 1,389 state residents dying from the virus during a period of 24 hours.

No other state in Brazil has been impacted worse by the coronavirus pandemic than São Paulo, which has reported 77,165 deaths and 2,532,047 cases.

The South American nation’s COVID-19 outbreak is the second-deadliest in the world after the United States, with 332,752 deaths and 13,013,601 as of Tuesday.

Brazil has averaged about 3,000 deaths and 75,500 new cases per day over the past week – a rate that has climbed steadily since February.

São Paulo has also resorted to late-night burials to keep up with demand, with some cemeteries authorized to stay open until 10pm.

At the Vila Formosa cemetery, workers in masks and full protective gear were digging rows of graves under flood lights and a full moon last week.

Coffins containing the bodies of victims who lost their battles with COVID-19 followed. A 32-year-old man was lowered down in a plain wooden box. Masked relatives gathered near the grave of a 77-year-old woman, before she too was lowered into a grave.

A total of 9,350 São Paulo residents who died of the coronavirus were buried in March – an increase of 56% from the previous month.

The city of Sao Paulo closed the month of March by registering 419 burials on Tuesday, the most since the pandemic began. If burials continue at that pace, city hall said it will need to take more contingency measures, without specifying.

Brazil currently accounts for about a quarter of COVID-19 daily deaths worldwide, more than any other country.

Infectious disease experts warn that it will only get worse, given President Jair Bolsonaro’s attacks on efforts to restrict movement and a slow rollout of vaccines.