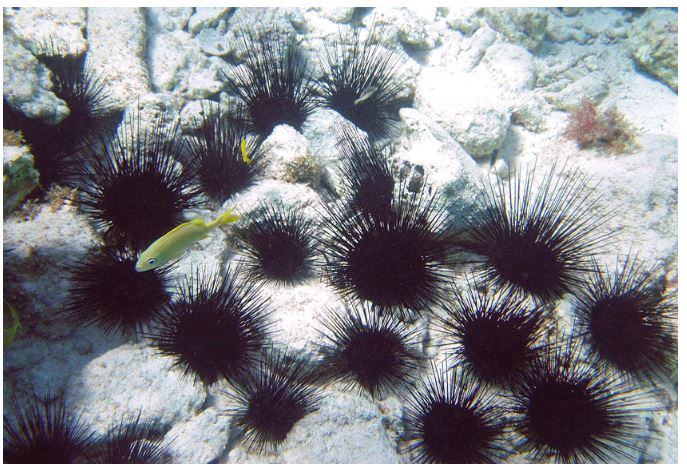 The Department of Fisheries (DOF) is asking members of the population who have made any sightings of dead and or dying Black Sea Eggs (Diadema antillarum) to make a report to the DOF immediately.

“This current die-off follows similar patterns to that of the early 1980s Diadema antillarum die off, in which there was 95-99 per cent mortality of the Diadema population throughout the Caribbean. The original cause of the 1980s die off was not determined, however the loss of this keystone species was devastating. Therefore, it is important to track the progress of this mass mortality event in the region and attempt to mitigate the spread of this phenomenon in St Lucia,” the DOF said.

It said sea eggs, or Sea Urchins are herbivores, and graze on algae on the reef, providing vacant space for coral to settle and grow.

“Too few herbivores can lead to algae overgrowth which may suffocate coral, killing them. In extreme cases, this led to an algae-dominated reef system, instead of a coral-dominated system like the coral reefs we know and love. Sea urchins thus play an important balancing act in maintaining reef health.”

The DOF said that Black Sea Eggs show no visible injury or symptoms, intact spines and normal spine movement when stimuli is received. But when sick, there are several signs of illness occurring over time, although they progress rapidly within a one to two day period.

“Spine movement is less active (and) spines may not respond to touch as quickly,” the DOF said, adding that dead Black Sea eggs may or may not have visible injury and that the skeleton is exposed with loss of spines.