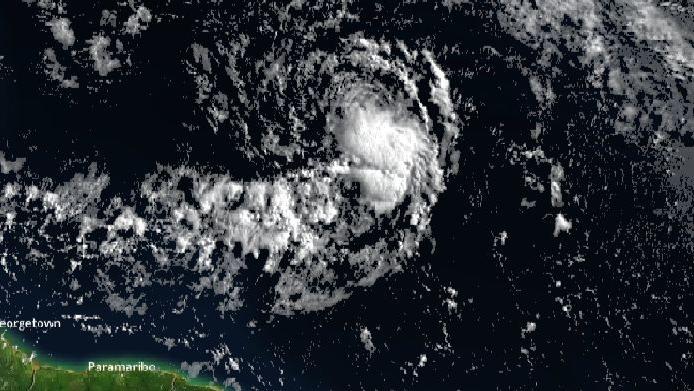 Hurricane Beryl lost strength on Saturday and weakened to a tropical storm with maximum-sustained winds of 65 mph as it moves toward the Caribbean. And a depression off the coast of the Carolinas is slowing down.

In its 11 a.m. update, the National Hurricane Center said Beryl was located about 720 miles east-southeast of the Lesser Antilles and still moving west-northwest at 14 mph.

Beryl continues to be a rather small storm, with tropical-storm-force winds extending out 35 miles. Additional weakening is expected during the next 48 hours.

Forecasters said Beryl appears to have lost some of its organization from Friday afternoon, and they still believe it will dissipate after it passes Hispaniola on Tuesday.

“Beryl is expected to remain in a light vertical wind shear environment today, but an increase in westerly shear is expected on Sunday, and the shear is forecast to become quite strong as Beryl moves over the eastern Caribbean early next week,” the hurricane center said. “As a result, the new NHC intensity forecast calls for little change in strength during the next 24-36 [hours], but predicts steady weakening after that time. 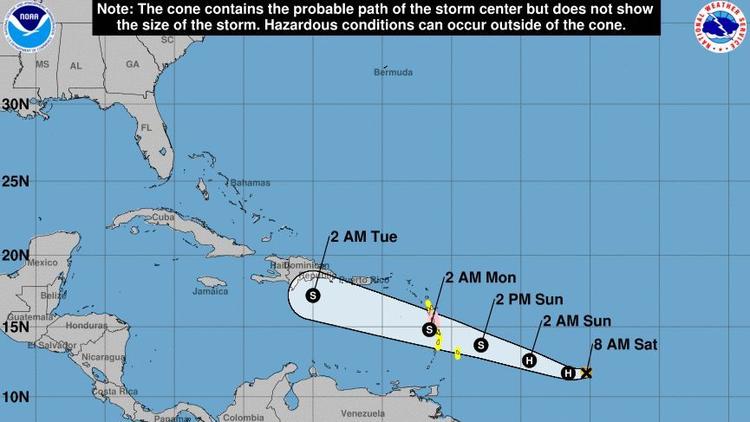 Still, the storm is expected to impact some islands in the Caribbean even if it doesn’t directly pass over them.

“On the forecast track, the center of Beryl will approach the Lesser Antilles over the weekend, cross the island chain late Sunday or Monday, and move south of the Virgin Islands and Puerto Rico on Monday and Monday night,” NHC forecasters said.

Puerto Rico is almost entirely outside the cone of uncertainly, but residents there — still recovering from Hurricane Maria last year — are keeping a wary eye on the storm.

Meanwhile, off the Carolinas, the topical depression that formed on Friday is moving to the north-northwest at 2 mph with winds of 30 mph.

“Some strengthening is forecast during the next several days, and the depression could become a tropical storm later tonight or on Sunday,” forecasters said. “An Air Force reconnaissance plane is currently approaching the depression.”

The hurricane center warns that “swells generated by the depression are expected to increase and affect portions of the coasts of North Carolina and the mid-Atlantic states this weekend. These swells could cause life-threatening surf and rip current conditions.”