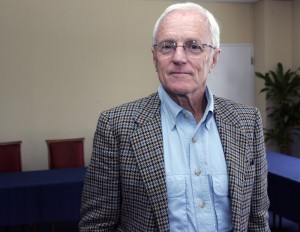 Tributes have poured in for former Bermuda Premier David Saul, after he died at home on Monday following two recent strokes.

Saul who was 77,  served as Premier from 1995 to 1997 and earlier as Finance Minister under the former United Bermuda Party (UBP) government, suffered a stroke in March and then a second stroke which, his family said “cruelly set him back and prompted a move of typical conviction, determination and finality in his mind”.

Premier Michael Dunkley said Saul will be remembered for his “kindness, adventurous spirit and lust for life”.

Opposition Leader David Burt described Saul as a man of “tremendous energy” who had a determination to “do things well”.

Saul’s son Jonathan said: “It wasn’t that he lost the will to live at all. We could see him in there working hard to communicate, trying to walk, but unable to talk or see properly. It was more that he understood his situation and made a conscious effort to move forward with dignity and embrace his final days.”

Dunkley said that as the Minister of Finance and later as the Premier of Bermuda “Dr Saul represented our country with passion, pride and vision, advancing key policies aimed at progressing Bermuda forward.In his later years, as the public is keenly aware, he devoted all of his energy and attention to his philanthropic endeavours.”

“Working with various charitable organisations Dr Saul made it his mission to raise awareness about the importance of protecting and preserving our marine environment.“I was proud to call Dr Saul a friend. I will remember him for his kindness, his generosity, his adventurous spirit and for embracing all that life had to offer,” Dunkley said.

Saul’s family described him as an “athlete, artist and statesman” whose achievements and awards were too numerous to list.

“David led a life for the history books,” the family said in a release.

“After suffering his initial stroke in March which took his speech and some mobility, he knuckled down and applied himself with his legendary optimism and endurance to regain his independence and ability to communicate through some aggressive therapy.”

There are plans to place the former politician in a pre-made reef box so he can be buried at sea, as he wished.

Saul told the Royal Gazette newspaper in 2006 about his plan to create an artificial coral reef after his death.

“My great grandchildren could swim down there to it and say, ‘There’s great grandpa down at that reef’,” he said.

Saul’s family said he was a proud and vocal ambassador for Bermuda and its people.

Saul succeeded Sir John Swan as Premier. The UBP went on to lose the 1998 general election to the Progressive Labour Party (PLP) after running the country for 30 years and later folded.

Most UBP MPs helped found the One Bermuda Alliance which ousted the PLP in the 2012 election.

Saul leaves behind his widow  Christine, a son, daughter and  four grandchildren.