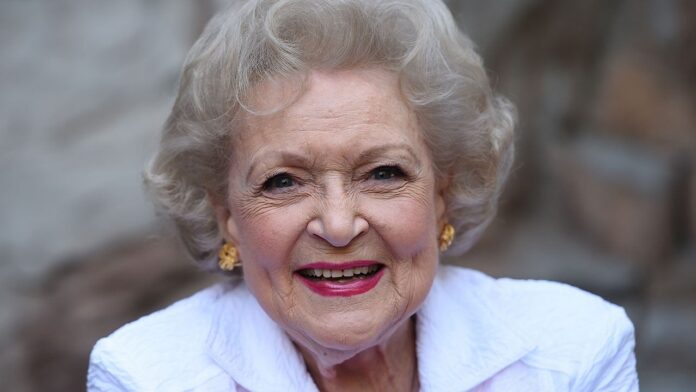 “Even though Betty was about to be 100, I thought she would live forever,” said Jeff Witjas, White’s agent and friend, in a statement to People on Friday. “I will miss her terribly and so will the animal world that she loved so much. I don’t think Betty ever feared passing because she always wanted to be with her most beloved husband Allen Ludden. She believed she would be with him again.”

In this week’s People cover story celebrating White’s approaching centennial (she was to turn 100 on Jan. 17), the icon said, “I’m so lucky to be in such good health and feel so good at this age. It’s amazing.”

The Oak Park, Ill., native — best known for playing mantrap Sue Ann Nivens on The Mary Tyler Moore Show (1973-77) and ditzy Rose Nylund on The Golden Girls (1985-92) — got her big break on the small screen in 1949, when she began co-hosting Al Jarvis’ live variety show, Hollywood on Television. Just two years later, she was nominated for her first Primetime Emmy Award and co-founded her own production company, which, a year after that, created Life With Elizabeth, a syndicated comedy showcasing one of her Hollywood on Television characters.

Though White broke into feature films in 1962 and went on to appear in successful movies such as Lake Placid (1999) and The Proposal (2009), it was on the small screen that she found her greatest successes — often just by being herself. During her almost two-decade run as the hostess of the Tournament of Roses Parade, she became a fixture on both late-night talk shows and daytime game shows — in particular Password, whose host, Ludden, she married in 1963.

After winning back-to-back Emmys in 1975 and ’76 for her portrayal of “The Happy Homemaker” on The Mary Tyler Moore Show, White starred in her own sitcom, the short-lived Betty White Show, and began a 10-year stint as the hostess of the Macy’s Thanksgiving Day Parade. In 1983, she became the first woman to win a Daytime Emmy for Outstanding Game Show Host (for Just Men!) and started recurring on Mama’s Family as Ellen Harper Jackson, the snooty character she’d originated on The Carol Burnett Show.

When The Golden Girls ended its run in 1992, White — who’d won the 1986 Emmy for Outstanding Actress in a Comedy Series and earned six more nominations for her work as sunny Rose — joined Rue McClanahan and Estelle Getty on the short-lived spin-off The Golden Palace. But, whether she had a regular role, White never seemed to slow down. Between guest spots on everything from The John Larroquette Show (which netted her another Emmy in 1993) to Bones (2015), she tackled recurring parts on Boston Legal (2005-08) and The Bold and the Beautiful (2006), and scored another Emmy for hosting Saturday Night Live (2010).

That same year, White turned a one-off appearance in the pilot for Hot in Cleveland into a five-year run as bawdy Elka Ostrovsky. As if that wasn’t enough, from 2012-14, she also hosted and executive-produced Betty White’s Off Their Rockers, which allowed seniors to prank young whippersnappers, and earned a Grammy for the spoken-word recording of her best-seller, If You Ask Me (And of Course You Won’t).

Among her other accolades are a Lifetime Achievement Award (presented at the 2015 Daytime Emmys), a star on the Hollywood Walk of Fame (right next to Ludden’s) and inclusion (as of 2014) in the Guinness World Records book as the record-holder for Longest TV Career for an Entertainer (Female).

Throughout her life and career, White — who had no children (but was stepmother to Ludden’s three kids from his first marriage) — was a staunch animal-rights activist. Not only was she a sponsor of both the Farm Animal Reform Movement and Friends of Animals, but she wrote Betty White’s Pet-Love: How Pets Take Care of Us, and donated all the proceeds from her clothing line and 2011 calendar to animal charities.

In recent years, People’s cover story reported, White had been living a “quiet life” at home of crossword puzzles, playing card games, watching Jeopardy! and continuing her animal welfare advocacy. Longtime Jeopardy! host Alex Trebek, prior to his own passing in 2020, said of his possible successor as host, “It’s probably going to be a woman, she’ll have to be bright, she’ll have to have a good sense of humor… Uhhhh, let’s see…. Betty White is my choice.”