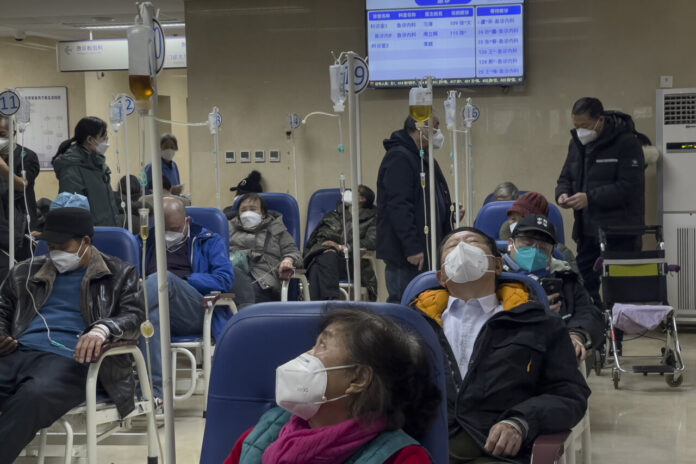 Patients, mostly older people, laid on stretchers in hallways or took oxygen while sitting in wheelchairs as a COVID-19 outbreak stretched public health facilities’ resources in China’s capital Beijing, even after its reported peak.

The Chuiyangliu hospital in the city’s east was packed Thursday with newly arrived patients. Beds ran out by midmorning, even as ambulances continued to bring more people in. Hard-pressed nurses and doctors rushed to take information and triage the most urgent cases.

The crush of people seeking hospital care follows China abandonment of its most severe pandemic restrictions last month after nearly three years of lockdowns, travel bans and school closures that weighed heavily on the economy and prompted unusual street protests in a country that quashes political dissent.

The outbreak appears to have spread the fastest in densely populated cities first. Now, authorities are concerned as it reaches smaller towns and rural areas with weaker health care systems.

Overseas, a growing number of governments are requiring virus tests for travellers from China, saying they are needed because the Chinese government is not sharing enough information on the outbreak.

The European Union on Wednesday “strongly encouraged” its member states to impose pre-departure COVID-19 testing, though not all have done so.

China has criticised the requirements and warned of countermeasures against countries imposing them.

World Health Organization head Tedros Adhanom Ghebreyesus said Wednesday he was concerned about the lack of outbreak data from the Chinese government.