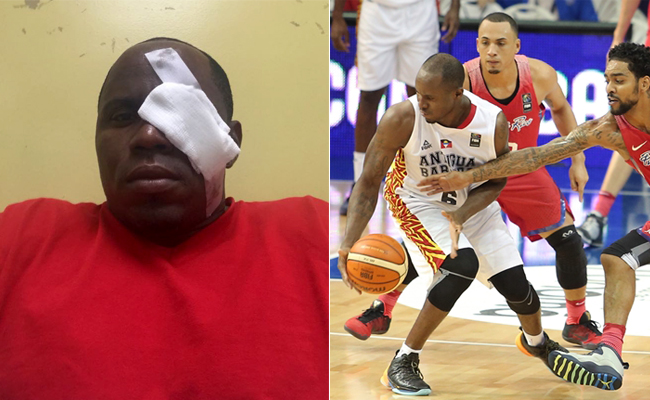 One of Antigua and Barbuda’s greatest basketball stars Lennox “Termite” McCoy is fighting to save his left eye after a freak accident in his home one week ago.

“It’s been a struggle,” said McCoy on Observer Radio earlier this morning.

McCoy described the accident saying, “Before the start of any season, I do resistance training at home. Tuesday morning I latched a resistance band on the top of the door. I remember that I pulled it once and then after pulling it the second time, all I remember is that I was on the floor bleeding from my left eye.”

The Braves guard said that, in retrospect, the door was not closed properly.

“I was about five feet away from the door. It’s just like someone hit you with a catapult. And the pain I felt, I wouldn’t wish on my worst enemy.”

McCoy went on to say that there was lot of blood on his bed and floor and that he had absolutely no vision out of his injured left eye.

“I got the hospital the same night,” he went on.

“Was there for about five or six hours and I saw the eye specialist early the next morning. I immediately sought a second opinion and went over to see Dr. Ian Walwyn. Walywn told me to stay put. He said that nobody is gonna be about to work on you anyway until we could get a good view of the eye.”

Termite had a check up on his condition yesterday and he indicated that, “We still can’t see the retina. We can’t see the back of the eye and that is concerning.”

The basketball star said that surgery is imminent, but the type of surgery will depend on the final prognosis once the inflammation and “cloudiness” would have subsided.

McCoy’s doctor has put him on alert to be ready to fly out for surgery at any time this week. His immediate options are Cuba, the United States, or Trinidad and Tobago.

Asked whether or not he thinks he’ll ever play professional basketball again, McCoy said, “Yeah, I will play again. No, if ands, buts or maybes that I will be again. I’ll probably play again with a mask for a couple of months, I’ll play again definitely.”

Termite works as the owner and technician at Len Mobile and he said that since the incident his business has took a bit of a hit.

“Things have slowed up a little bit at my shop because I can’t be there and it’s kinda difficult. It’s just been a real real real difficult week for me and it’s a learning experience. God gives and he takes, and he also gives back. I am a firm believer that I live by faith and not by sight.”

He has gotten quite a bit of support from family members and members of the basketball fraternity: “I’ve had a lot of people been calling me and supporting me and making [financial] pledges to me to help me throughout the process. I spoke to [basketball general secretary] Aldo [McCoy] and [Minister of Sports] Daryll [Matthew] and they showed their concern.”

The star says that he stays home and does mundane tasks and indicates that even these tasks are a task on him anything more than fifteen minutes at a time.