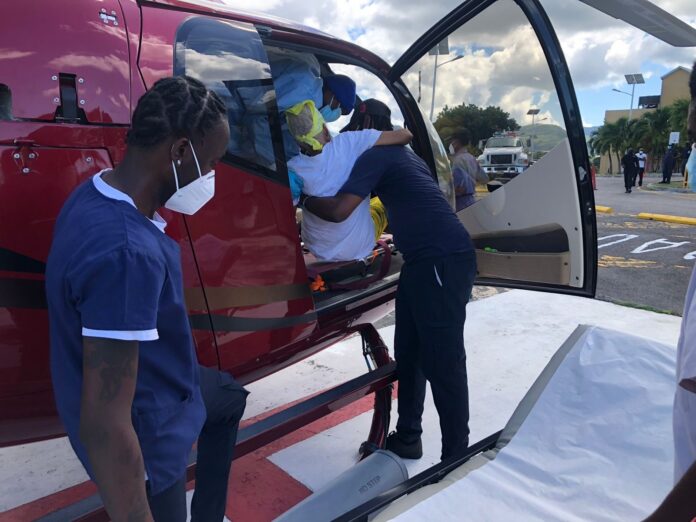 A freshly-minted 90-year-old Codrington woman, who was recently medevac’d by CalvinAir Helicopters (CAH) after developing a serious medical condition which required surgery, is recovering and celebrating simultaneously at home in Barbuda.

Ramona Joseph, who turned 90 on Wednesday, November 17, is also the mother of popular Barbudan Calypsonian, Ordrick “King Montgomery” Samuel. Joseph was flown to the Sir Lester Bird Medical Centre (SLBMC) by CalvinAir Helicopters late last week, after doctors on the sister isle determined that her condition required further intervention by a medical team in Antigua.

According to Samuel, his mother had received a cut on one of her toes some time ago while gardening. The toe, he said, became infected and she had been complaining for some time about the resulting pain. It was when one of her toes started to become discoloured, he became alarmed and sought medical attention at the Hannah Thomas Hospital.

Fortunately, Mrs. Joseph was able to have a successful surgery at SLBMC for her condition, which had the possibility of causing further health issues.

The CAF, with the assistance of CalvinAir Helicopters, sent a birthday bouquet to the sister isle today, to help brighten Mrs. Joseph’s day.

Jamilla Kirwan, Ayre Group Media Relations Specialist, said,  “On behalf of the Calvin Ayre Foundation; CalvinAir Helicopters; the Ayre Group and Ambassador Calvin Ayre, I’d like to extend a happy 90th birthday to Mrs. Ramona Joseph over there in Barbuda. We are very happy to have been able to play our role in getting you to the hospital for your emergency procedure. We are also happy that the procedure was successful and so, we’re celebrating your 90th with you. Happy birthday and a speedy recovery.”

According to Kirwan, although CAH operates a commercial business, the decision to contribute flight time free-of-cost to emergency airlift patients was made by Chairman of the Ayre Group, Ambassador Calvin Ayre, under the mandate of giving back to the twin-island nation.

“The emergency flights,” she said, “which would commercially cost US$2,000 (ECD$5,400) are paid for by the Calvin Ayre Foundation (CAF). The Foundation also covers the cost for any search and rescue operations.”

To date, this is the eighth medical emergency airlift CalvinAir Helicopters has provided since commencing operation in November, 2020.