The Country PA and Turrem Data Group have today announced that proceeds raised from the inaugural Barbuda Cup, held at Cowdray Golf Club on Thursday 5th July, have smashed their target of £10,000 by raising close to £18,000 profit.

The event, hosted by Sir Richie Richardson, was a huge success with 72 players on the day and 160 at the Caribbean BBQ and party into the evening, all there to support the fundraising to help send much needed materials to help Barbuda rebuild following Hurricane Irma in September 2017.  There was even guest appearance by comedian Mike Osman as Donald Trump…. Much to the delight of the guests, he arrived in full character being driven down the course in a golf buggy with flowing ‘Stars and Stripes’ flags & the presidential ‘Hail to the Chief’ being blared out across the Rother Valley.

One of the highlights of the day was from Komo Cocktails, who were enlisted to set up a Rumshack at the Halfway Hut, ensuring that a Caribbean tone was set from the very start.  Cowdray’s stunning course is structured in such a way that there are 3 holes that pass by the hut, ensuring a consistent party here from the outset.

The High Commissioner Karen-Mae Hill and head of Antiguan Tourism Authority Cherrie Osborne were in attendance all day and took resident post at our Rumshack in the morning to talk to passing groups – a perfect opportunity for everyone to hear about progress in Barbuda and opportunities to visit Antigua.

Support came loud and bright, none more so than by Alex Alley (world champion round-the-world sailor) and Guy Butters (ex-Tottenham, Portsmouth and Brighton & Hove FC) and his team who fully threw themselves in with full island attire, they clearly didn’t want to be missed on the green!  Other support came from sporting stars such as Lewis Hatchett (former Sussex CC bowler) Kerry Mayo (ex-Brighton and Hove FC) and Jason Dodd (ex-Southampton FC).  We were delighted to also be joined by a couple of Fleet Street legendary journalists Geoffrey Dean and Graham Otway, who entertained their teams around the course with stories of sporting memories. 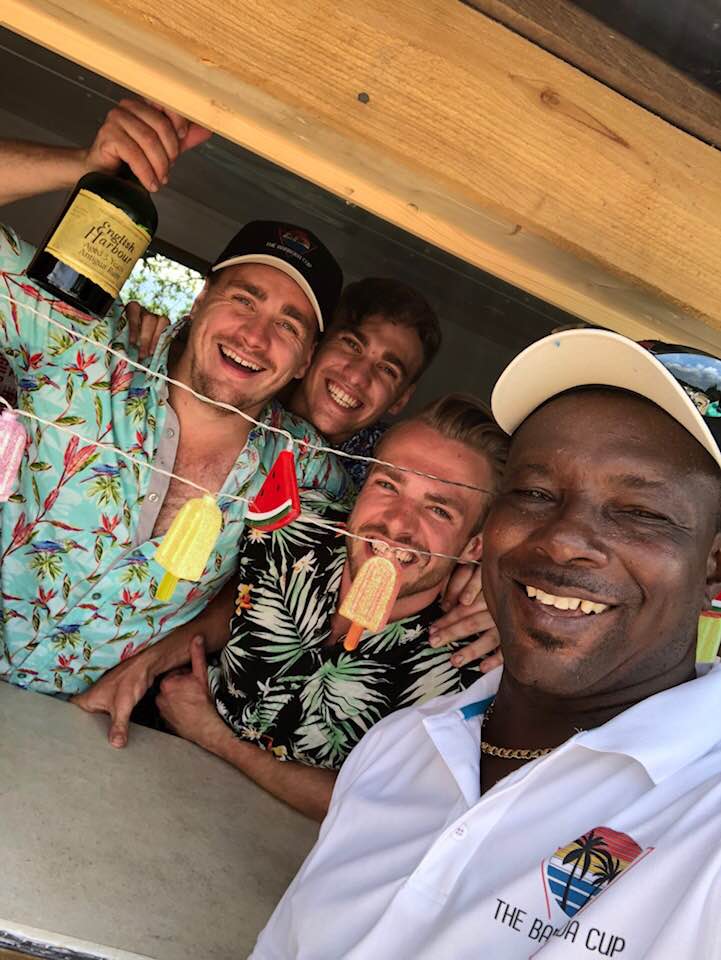 We had the pleasure of having several professionals join us too; Maria Tulley, Adam Harnett, Kevin Garwood, George Hannah, Steve Hall, Obi Ayton and Craig Gardener.

Several of the prizes were hard fought with the nearest the pins going to team NGD, Matt Hills and Craig Gardner.  The longest drive was won on the day by Chris Edwards.  Unfortunately, no-one picked up the Hole in One prize sponsored by G&M International– even after a few interesting attempts, and the closest being by champion sailor Alex Alley after his ‘Happy Gilmour’ style approach shot! No-one was more surprised than him by this……

Katy Tytler, The Country PA Exclusive Events comment “It was an absolute pleasure to work with Sir Richie Richardson to create the Barbuda Cup event.  We’ve been overwhelmed by support shown from local businesses and network and I’m delighted that we have managed to raise this incredible sum.  Everyone’s enthusiasm and energy was infectious on the day, from registration until the last person left.  I’m delighted to say that we have now been approached to host a similar event and we are already plotting with Sir Richie to hold next years’ Barbuda Cup.”

Steve Tytler from The Barbuda Cup’s main sponsor, Turrem Data Group, also added “Barbuda is a small island in paradise that is in trouble, and if paradise is broken, we need to help rebuild it.  With 72 players throwing themselves into the day, and families joining for the BBQ afterwards to support our auction, I can’t believe we have raised close to £18,000.  Although there was much laughter on the day, the High Commissioner and Sir Richie were able to purvey the serious situation and we are thankful to everyone, players, sponsor, helper that made the day such a success. Same time next year….”

We are planning The Barbuda Cup 2019 now for June/July 2019, and there is already talk of a return fixture in Antigua at Sir Richie’s home club, either in November 2018 around the Women’s 20/20 World Cup or in February 2019 when England tour the West Indies. If you are interested in receiving more details about these trips contact Katy Tytler at The Country PA via [email protected]