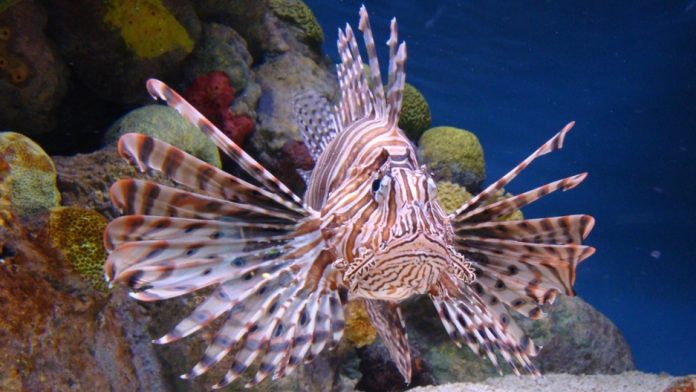 Barbadians are being encouraged to include the invasive lionfish species in their diet.

that research on the species was being carried out to determine how pervasive it is in the island’s waters.

“I know we have a problem with lionfish. Lionfish have created havoc in our reefs and our oceans, eating a lot of the potential fish and destroying species,

with the Barbados Tourism [Investment Inc.] and [other] players to make it a part of the Barbadian diet,” said Forde.

fish teach residents so “that which was creating havoc and is a problem we will now be able to incorporate as part of the diet”.

He suggested this could also create new business opportunities.

Forde made the comments in Parliament on Tuesday, while leading off debate on a

the guiding national policy document for the management and conservation of biodiversity in Barbados.

He was outlining target six of the 12 priority strategies for biodiversity conservation outlined in the plan, which states that by 2030 “invasive alien species and pathways are to

be identified and prioritised, with priority established species being managed and measures are in place to prevent the introduction and establishment of new invasive alien species”.

Barbadians to catch and eat more lionfish as he expressed concern that some fishermen were catching juvenile dolphin fish and overfishing other species.

“I would like to encourage Barbadians to reduce the intake of pot fish, only because the pot fish is what is protecting the coral. If they want to eat fish, eat more lionfish.

Take out the venomous part of the spine and eat more lionfish. Lionfish now has to become a part of the way we do our diet,” said Humphrey.

He said in addition to teaching residents how to safely prepare the fish for consumption, he wanted to see a competition in catching, preparing and serving lionfish introduced.

“…Because the lionfish is destroying all of the other fish. These things are gluttonous.

They are eating everything and if we care about the biodiversity of the ocean we have to find a way to get rid of the [lionfish],” Humphrey insisted.

He said the promised Fisheries Management Regulations to tighten the parameters

surrounding fishing and bring greater order to the industry were still before the Chief Parliamentary Counsel.

Among other things, the new regulations will address the type of fishing gear to be used as well as the size, species and weight of fish that can be caught, and outline the opening and closing of fishing seasons.

Insisting that the draft regulations were critical, Humphrey expressed concern about the practice of catching juvenile dolphins and passing them off as “a new kind of dolphin”.

blue crates –15 and 16 dolphins no bigger than a flying fish or the way flying fish used to be – trying to convince Barbadians that these are a new kind of dolphin . . . .

to catch these fish that are undersized and sell them to Barbadians under the pretence that it is a new kind of dolphin.

“The ones I am talking about are the baby ones that people are selling to Barbadians, for a lot of money too, and damaging the ocean space in so doing.

Some of the fish vendors will tell you they [are] only selling it because they got to eat . . . but this new regulation will ban that,” said Humphrey.