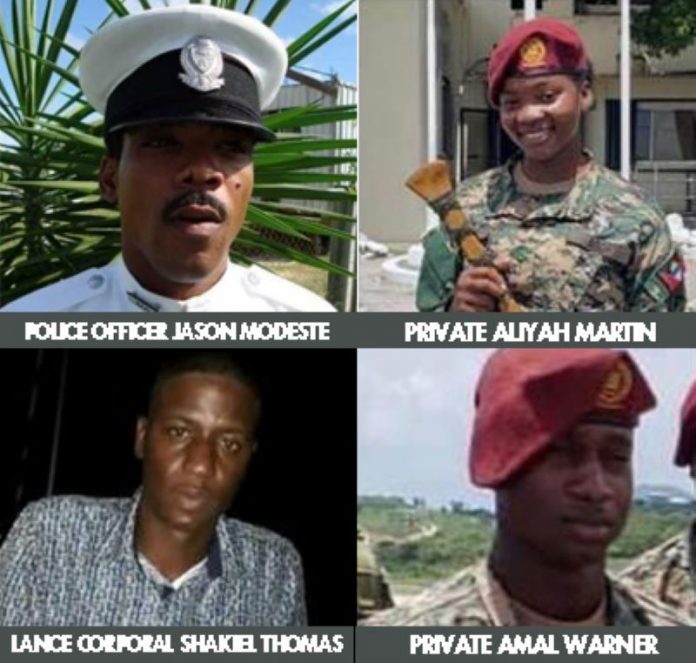 The bail application for three accused of the murder of Bruce Greenaway has been denied.

This comes less than a month after one of the accused, Armal Warner, was given bail in the sum of $40,000 with no cash component.

On Friday morning, Justice Colin Williams told the other three defendants, Jason Modeste, Shakiel Thomas and Aliyah Martin, that for the second time, their bail application was rejected.

However, the Judge is allowing police officer Modeste to be moved from the prison to the Police Headquarters while the other two soldiers will now be confined at the Antigua and Barbuda Defense Force compound.

The four law enforcement officers are believed to have strangled Greenaway sometime in April 2020.

The Falmouth man’s lifeless body was found at Indian Creek on April 13, 2020 – a few days after his family reported him missing.

Warner and his fellow defence force soldier, Martin, had already applied for bail in late June 2020 but were denied by Justice Iain Morley.

Thomas made his attempt in early July 2020 but he, too, was unsuccessful, while the final co-accused in the matter –Modeste –applied earlier this year and was denied by the same Judge.

However, Warner is now on bail after being granted last month by Justice Williams. The court held that the facts and circumstances of his bail application differed from the other three. Warner, who is represented by Attorney Andrew O’ Kola, was told the conditions of his bail. He must provide two sureties who have property valued at least $40,000. He was also ordered to sign in at the nearest police station once per week, surrender his travel documents and inform the court before he relocates to a different address.

Warner will also forfeit his bail if he commits any other offence.