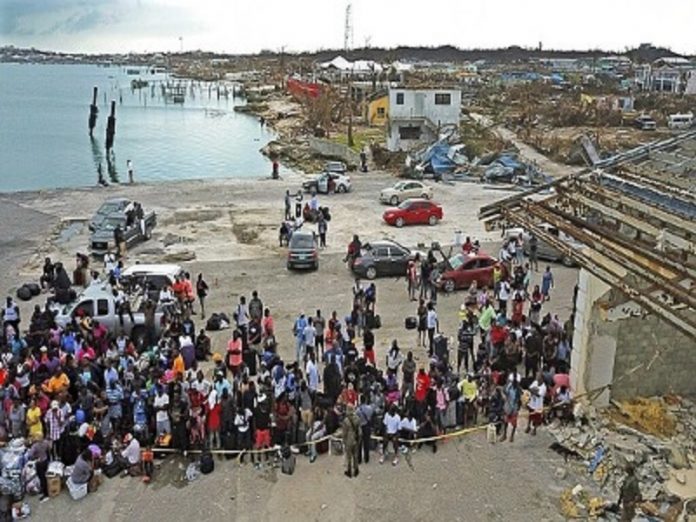 Hundreds of evacuees were arriving in New Providence on Saturday from the devastated islands of Abaco and Grand Bahama with horror stories of dead bodies still not yet recovered and describing the devastated areas left by the Category 5 Hurricane Dorian as similar to a war zone.

“People are confused right now, people are confused, people are angry, people are tired. We eat everything in this boat because there wasn’t no food. I had to leave my wife, my children, so many people laying on the ground in the mouldy house,” Lorenzo McKenzie, one of than 600 residents who arrived on a mail boat.

He told reporters that while the water had subsided, the area looked like “Baghdad.

“It looks like Desert Storm hit Freeport. Everyone taking their stuff out, throwing it outside, people try to salvage what they had, in Hawksbill it’s totally devastated,” he said.

The government has warned that it expects the death toll to rise significantly than the 43 deaths recorded so far as search and rescue teams enter areas that had been devastated by the storm when it hit the archipelago with winds in excess of 180 miles per hour (mph) last Sunday.

In a statement issued on Friday night following a Cabinet meeting, Prime Minister Dr. Hubert Minnis said that 35 people had died in Abaco and eight in Grand Bahama, the two islands hardest hit by the storm.

Minnis said that the deaths were a stark reality the country faces following the storm and that with many people still missing, the number of casualties will significantly increase.

“The loss of life we are experiencing is catastrophic and devastating. The grief we will bear as a country begins with the families who have lost loved ones. We will meet them in this time of sorrow with open arms and walk by their sides every step of the way.

“To those who have lost loved ones, I know there is absolutely nothing we can say that will lessen your pain and loss. We offer you our shoulders to cry on, our prayers of comfort and our promise that your loved ones will never be forgotten,” Minnis said, urging the media and the country to respect the loss of life.

The residents arrived here on three commercial boats and McKenzie told reporters that the level of death and devastation had left many people shaken and confused.

He said also that Grand Bahama residents were expressing fear that the relief materials being sent to the islands would not reach those most in need.

“People don’t have insurance. My sister sleep in an attic for four days over the bridge. A neighbour across the street, his wife died, people drowned, people dead. People dead in Freeport – this ain’t no joke,” an emotional McKenzie told reporters.

Several psychologists and therapists have announced plans to launch a crisis management counselling initiative to provide assistance and support.

Social worker and family therapist, Jenna Christie, told the Tribune newspaper that the initiative will help to stabilise survivors, give them a sense of control, and restore some level of normalcy and hope to their lives.

She described crisis counselling as being crucial for survivors as having food and water.

“It is of the utmost importance. A lot of persons look at the basic, tangible, physical items that they need, but they also need this,” she said.

The Bahamas Red Cross has appealed for manpower saying assistance was needed to help pack and lift boxes, as well as to operate machines.