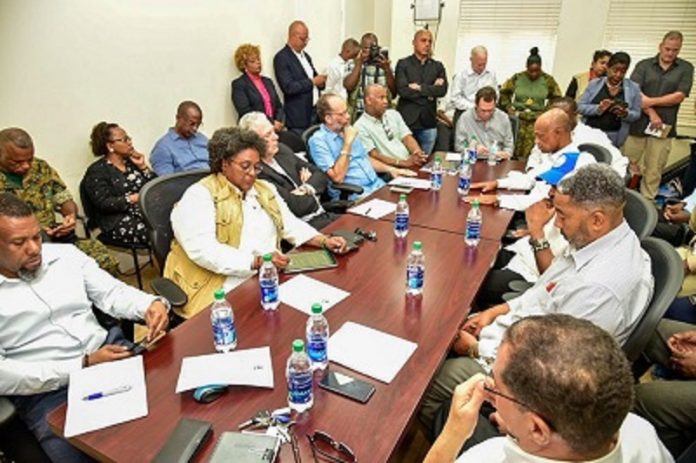 The Bahamas Cabinet will meet in “emergency session” on Friday to discuss some of the issues discussed with a Caribbean Community (CARICOM) delegation that visited the hurricane battered archipelago on Thursday.

Prime Minister Dr. Hubert Minnis, speaking to reporters after the meeting between the CARICOM delegation that was led by its chairman and St. Lucia’s Prime Minister Allen Chastanet and including Barbados Prime Minister Mia Mottley, said that security had been among the matters discussed.

Caribbean countries,, like Jamaica, have sent in military and police officesr, to assist in maintaining security in the Bahamas

He said the issue of the education of the children affected by the storm would be discussed at the emergency Cabinet meeting “because we must ensure that the education for the kids in Abaco continue.

“We have to ensure that there’s no break in their education and it is essential to continue,” he said, adding “we are looking at accommodation”.

Minnis said that he and Prime Minister Chastanet had also discussed the issue of accommodation would be discussing that matter further “because he has had that challenge himself, so we will discuss that further as to the value of relocation versus the value of bringing in the necessary accommodation…and what types of accommodation and most appropriate for our nation”.

Students from the Bahamas who have been affected by Hurricane Dorian are also being offered free room and board at a historically black university in Virginia, in the United States.

Hampton University announced Thursday that students from the University of the Bahamas can attend classes tuition-free at Hampton during this fall’s semester.

The school says that once the semester is over, the Bahamian students who wish to remain at Hampton can continue their education there at the regular rates.

While Bahamian authorities have said that 30 people had so far been confirmed dead as a result of the storm, the figure is expected to rise significantly with one government minister warning Bahamians to be prepared for a “staggering” number.

Prime Minister Minnis is expected to also fly into Grand Bahamas on Friday, one of the two islands hardest hit by the storm, described as the worst in modern history.

Meanwhile, the sub-regional Organisation of Eastern Caribbean States (OECS) has taken a decision to provide US$100,000 each to the Bahamas.

“Although it is acknowledged that the sum is small compared to the damage caused by the Hurricane Dorian, the gesture is intended to let the Bahamian people know that the people of the Eastern Caribbean feel their pain.

“All the states have been hit by hurricanes that have caused great pain and suffering, since 1995 when Hurricane Luis wrought great destruction in several island-countries,” according to a statement issued by the Antigua and Barbuda government, which is chairing the nine-member sub-regional grouping.

The Barbados-based Caribbean Development Bank (CDB) said it has allocated one million US dollars in assistance to the country.

“We are devastated by the loss of life and infrastructure in Bahamas, hit by the strongest storm ever recorded in the archipelago. The Caribbean Development Bank stands ready to support the people of the Bahamas to make quick recovery,” said Dr. Wm Warren Smith, CDB president, who was part of the CARICOM delegation that visited Nassau.

“Countless houses, medical facilities and roads were destroyed or are under water, and the number of lives lost is still rising. The devastation is a stark reminder that climate change is real and a major threat to our rRegion. Our region needs to build better and stronger in order to minimise damage and mitigate future losses,” said Smith.

With initial assessments indicating an estimated 76,000 people need urgent support, the United Nations’ World Food Programme (WFP)said it is arranging for eight tons of ready-to-eat meals to be provided as part of a US$5.4 million overall funding package.

WFP Spokesperson Hervé Verhoosel said that the UN agency has a team on the ground, assessing the full extent of the damage and identifying those in greatest need.

Verhoosel said that WFP is working closely with the Caribbean Disaster Emergency Management Agency (CDEMA), the government of the Bahamas and partners to “identify the most urgent needs and provide support in the vital areas of food, telecommunications and logistics”.

An airlift is being organized, from the UN hub in Panama, of storage units, generators, and offices for two logistics hubs to be established on the main islands, said Verhoosel, adding that WFP is also providing satellite equipment to ensure connectivity for emergency responders across the affected island group.

The spokesperson noted that the assessment teams carried out an initial aerial reconnaissance mission to the affected islands on Wednesday, with the aim of getting teams to the hardest-hit areas as soon as possible.

He added that the agency is making US$5.4 million available, as part of a three-month Limited Emergency Operation (LEO), “because of the severity of the situation”.